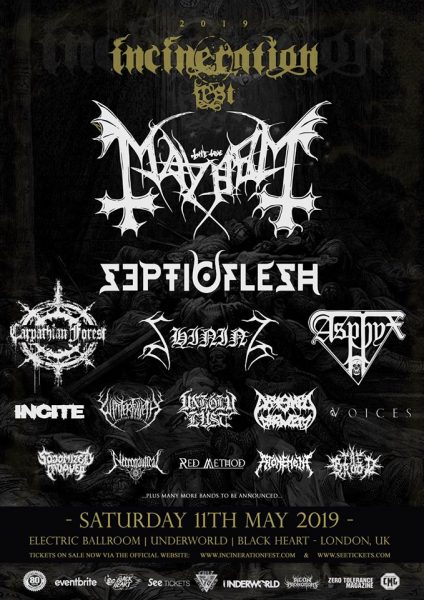 In May Incineration Festival will once again take over Camden Town in north London with a stellar line up of metal extremists that this year will be headed by Black Metal titans Mayhem and Carpathian Forest.

Norwegian black metal icons Mayhem are one of extreme metal’s most controversial and influential bands. The band will perform a special ‘Demon Anthology’ show which will be an extended set combining their greatest songs from all of their albums. This will be the only UK performance of Mayhem this year.

Fellow Norwegian black metal masters Carpathian Forest return to London for the first time since selling out their headline show at The Underworld six years ago. Joining the black metal duo at Incineration will be the mighty Dutch death demons Asphyx.

The most recent addition to the line-up is Septicflesh who have stepped in to fill the void created by Batushka. Despite having a UK exclusive deal agreed with Incineration Festival, Batushka have now committed to playing Download. For this reason, the Polish outfit have been dropped from the festival and replaced by the flamboyant Greek metal masters.

Also joining the line-up, are legendary Norwegian blackjazz pioneers Shining who will return to Incineration for the first time since 2015. Last year’s incredible album Animal featured prominently in numerous End of Year ‘Best of’ polls. US metal crew Incite will also be at Incineration to perform tracks off their latest album Built To Destroy.

Flying the flag for the UK will be the likes of northern pagan darklords Winterfylleth, Voices performing material from new album Frightened and Welsh death metal slayers Sodomized Cadaver.

Incineration Fest takes place on Saturday 11 May across three Camden venues, the Electric Ballroom, The Underworld and the Black Heart. More than 60% of tickets, priced £49.50 each, have now been sold.