Sealclubber are probably never going to be flavour of the month with the World Wildlife Federation but there’s no excuse for the rest of us not getting on board and showing our support for this enterprising Midlands quartet.

Stoical is the debut full length release from the Stourbridge firebrands and it will clear out any blocked eardrums more quickly than a bottle of Otex, and without all the mess.

Sealclubber have shared stages across the Midlands over the past year or so with such well-established and respected names as Burden of the Noose and Opium Lord.

The impact of this debut offering suggests that these Black Country urchins deserve to be showcasing their combined sludge/hardcore mix to wider audiences before too long.

With more layers to them than a solo Himalayan explorer, Sealclubber have plenty to offer, ‘Vow of Silence’ even carrying a deliciously earthy riff that carries all the warming qualities of a late night mug of cocoa.

The album consists of six songs although it’s probably stretching things to include the bizarre and obscure mutterings that make up the fourth track, ‘St Jude’s Waiting Room, Dead for 12 Days’ in that assessment.

Three of the other songs are lengthy pieces, including the explosive opener ‘Tales of a Romanian Horse Whisperer’ which launches itself into action with all the subtlety of a sledgehammer being used to open a tin of sardines.

Gradually though things develop into something much deeper, a pounding defiance replacing the earlier swathes of chaos and carnage. Even a hint of melody is allowed to dress the riffs as this monstrous first blow rocks you back on your heels as though caught by a punch you just didn’t see coming.

It eventually tails off before seamlessly bleeding into the second song ‘Haima’, when the savage vocals are again brought to the front. The low slung bass riff that opens up ‘Catalogue of Failings’ carries more than a passing resemblance to muscle throbbing cavemen doom kings Conan.

The neanderthal pounding is similar to the morose Merseysiders with the tail end of the song again veering towards glacier crushing basslines that threaten to dislodge a filling quicker than a Curly Wurly left over from your Christmas selection box.

After the previously mentioned mysteries encompassing ‘St Jude’s Waiting Room, Dead for 12 Days’, Sealclubber then display an impressive maturity with the mesmerizing ‘Vow of Silence’.

After almost five minutes of irresistible sludge symphonies that ebb and flow with suspense and menace, Simon Blewitt adds his razor like vocal kick as all around him Sealclubber continue to raise the temperature and tension.

A quite compelling debut release ends with the epic instrumental ‘I Only Desire The Things That Will Destroy Me’ which slowly and softly starts its 11-minute journey towards melancholic fulfillment.

Not dissimilar from such awesome purveyors of crushingly haunting doom Pallbearer, Sealclubber have the bonus of being right here on our Midlands doorstep, not residing in the Arkansas badlands.

Any chance to catch these fellas live in 2016 is recommended, as of course is this exceptional first album. 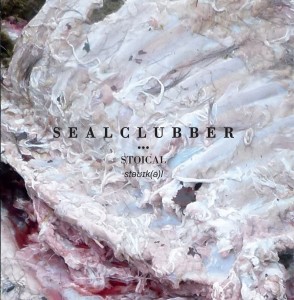