To say opening band Keelhauling make an intense live experience would be something of an understatement. Beginning with a brutal instrumental that’s akin to a musical pummelling the arrival of vocalist Cristhyano Bassan lands the killer blow with the track ‘Ling Chi’. ‘Brazen Bull’ follows with near constant blast beats nestling next to crushing riffs that are underpinned with some pounding basslines and the maelstrom is completed with suitably gruff, guttural vocals. Showing no signs of fatigue original tunes like ‘Coprophagia’ increase the intensity while ‘Master of Brutality’ does exactly what it says on the tin. The self titled ‘Keelhauling’ caps an impressive set and I was surprised to learn that this was the bands first live outing because they seem really comfortable onstage but I’m certain we’ll hear more from them in the near future. 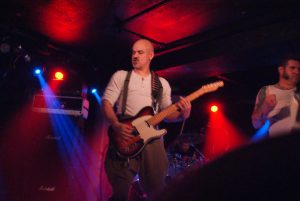 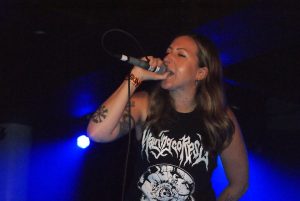 The excellently titled Binge Drinker are a pleasing amalgamation of styles with black metal riffs are played with punk attitude and delivered by a charismatic female vocalist. Powered by (as their name suggests) copious amounts of alcohol, their set is a middle finger salute as ‘Hate Spit’ gets things of to a raucous start and ‘Toe Tag’ and ‘Shitpoc’ keep up the pace. Wasting little time between songs adds to their sense of urgency and while their name could render them something trivial their lyrics attest to the opposite as ‘Antisocial’ and ‘Money or Your Life’ display keen social observations while set closer ‘Lord Hesseltine’ finds the band leaving in a blaze of sonic fury…which is just how they entered. 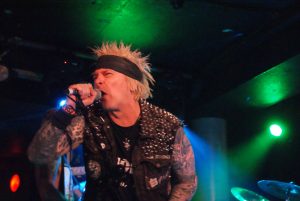 Suffolk noise merchants Extreme Noise Terror make a welcome return to the Camden Underworld. Birthed from the same scene that spawned Napalm Death, Extreme Noise Terror were just as influential on the nascent grindcore genre but they’ve never received the same level of recognition. Such facts pale into insignificance as ‘PC Patrol’ finds ENT with their foot firmly on the pedal and they don’t let up for the next 50 minutes. Warlike in its brutality the band deliver the soundtrack to global apocalypse as ‘Religion is Fear’ and ‘Lame Brain’ absolutely stomp. Specialising in a twin vocal attack ‘False Prophet’ is dedicated to much lamented and missed former vocalist Phil Vane and its sonic fury is a perfect tribute. ‘Raping the Earth’ causes a pit to erupt and soon the floor resembles a medieval battlefield. It’s great to see that time hasn’t blunted the bands rage as ‘Bullshit Propaganda’ and ‘Third World’ all amp up an already rabid crowd before ‘Carry on Screaming’ and ‘Murder’ slay any survivors. 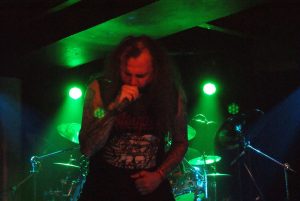 The chances of the original line-up of Pungent Stench reforming are pretty remote so here’s the next best thing; original vocalist and guitarist Martin Schirenc performing their classic 1991 album Been Caught Buttering in full. The sonic fury of Extreme Noise Terror is a hard act to follow but Pungent Stench bring a different kind of heaviness. The were often labelled death metal, which is true, but there was so much more to their sound which included crust, thrash and traditional metal. An often overlooked ingredient was the bands dark sense of humour and tonight’s rendition of Been Caught Buttering brings that to the fore, most notably on set and album opener ‘Shrunken and Mummified Bitch’. With its Sabbath style riff ‘Games of Humiliation’ brings a doom feel to proceedings before ‘Brainpan Blues’ brings that classic Floridian Death sound. Old school to a man the band flip the record over and we’re into Jeffrey Dahmer’s favourite track ‘And Only Hunger Remains’. This current incarnation can easily match the original line-up, not only musically but also in intensity as ‘Sputter Supper’ fairly races along as does next track ‘Sick Bizarre Defaced Creation’ with it’s funky guitar riff. The ode to venereal disease ‘Splatterday Night Fever’ brings this run through of Been Caught Buttering to a conclusion and judging by the crowds reaction it’s made a lot of old metalheads very happy. What follows are a few more tracks from Pungent’s back catalogue including a brutal ‘Bonesawer’ and the musical tsunami that is ‘Dead Body Love’ ensures nobody leaves disappointed’.