Like Delbert Grady, the sinister ex-caretaker of the Overlook hotel, Savoy Brown have ‘always been here’…although in a much less creepy way. Formed in 1965 by guitarist Kim Simmonds, they were one of the “big six” of the second wave of British Blues Explosion bands, sharing stages, identities and band members with fellow luminaries Fleetwood Mac, John Mayall and Chicken Shack.

And here we are in 2020 and they’re still going strong, and still led by Simmonds. ‘Ain’t Done Yet’ is, believe it or not, studio album 41, following hot on the heels of last years critically lauded ‘City Night’.

Recorded in New Jersey, this latest release is a continuation of their previous album’s sound, namely traditional, heavy(ish) blues rock. There are no curveballs, no surprises, no dalliances with grime, it’s a blues rock album, grounded in the tried and tested 60’s template. If it ain’t broke…

Songs tend not to go down too many rabbit holes. They are blues grooves – a traditional framework is set up and the lyrics and guitar solos add some colour. There’s 12-bar, there’s boogie, there are slow blues and…well, that’s about it. The guitar sound is slightly heavier and crunchier than you might expect, they veer towards ZZ Top distortion levels occasionally, not quite what you expect from blues boomers. ‘Jaguar Car’ has a distinct John Lee Hooker feel. ‘Hooker ‘N Heat’ to be exact, while ‘Soho Girl’ heralds the albums hardest rocking moment.

Simmonds matured, world-weary vocals add a nice feel to the songs, particularly on ‘Devil’s Highway’. Steel dobro is added at one point to give added down home authenticity and ‘Feel Like A Gypsy’ brings a fluid Latin/Santana vibe to the party. ‘River On The Rise’ adds a touch of George Harrison jamming with Creedence. It’s all good.

Simmonds also give himself a couple of opportunities to stretch out with a few tasteful extended solos. Closing track ‘Crying Guitar’ pretty much tells you what it’s going to sound like. The lead guitar is gently, easily expressive, calling to mind a less fiery Gary Moore. It feels like a timely (unplanned) tribute to Peter Green.

‘Ain’t Done Yet’. Very apt. There’s life in the old dog yet but it may just have a few teeth missing. It’s good, competent blues rock. Hell, they’ve been doing this stuff for 55 years, you’d expect them to know what they’re doing. The blues rock field, however, does not just have 5 or 6 main players anymore. It’s a broad church, there’s a lot going on and Savoy Brown don’t bring anything radical or head-turning to the table. There’s not the creativity or fire of Bonamassa, the 21st Century re-tooling of Larkin Poe or Gary Clark Jr. or, for that matter, the ‘what-the-fuck’ brilliance of Fantastic Negrito. It’s good, it’s safe…and you can make of that what you will.

Pre-order the album from: http://smarturl.it/AintDoneYet 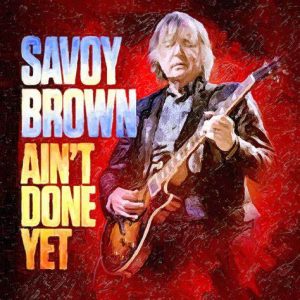