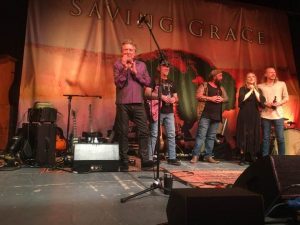 Since his old band were disbanded, (is it really over 40 years ago?) Robert Plant has never been a man to stand still, and that restlessness seems only to have increased in the 21st century. His latest project, Saving Grace, is at least his fifth project since the turn of the millennium, although in this case, he’s using it as a vehicle to perform some old songs, from various sources, that, as he put it, he wanted to bring out into the light. This series of dates, originally scheduled for May, was mostly focused on some of the smaller theatres around the Midlands, although there was a diversion to the South Coast, as well as a date at the Underneath The Stars festival in South Yorkshire, and midway through arrived in Dudley on a humid Monday night.

SCOTT MATTHEWS was support on several of the dates. His set was largely acoustic, although he did switch to electric guitar for some songs, and there was often a percussion backing track. He started with some slower songs, including ‘Virginia’, before ‘Sunlight’ took the tempo up a little, and he even had a new song for us, ‘Intruders’. While he plays solo, he can vary his sound considerably, thanks to the various guitars and backing tracks, but it would be interesting to know how his songs would sound with a full band, not necessarily to fill in any gaps, but to add some extra textures. He always plays an entertaining set, and as usual, this one received a good reception from a fairly full hall.

Over the last few years, it’s never been wise to try and predict what Robert Plant will do next, and without knowing previous set lists I daresay few would have guessed that SAVING GRACE would open with a song by the Irish folk band Planxty. Its title was appropriate, ‘As I Roved Out’, and it was a good example of how the band works, with Plant’s voice blending beautifully with Suzi Dian’s, either singing in unison or harmonising, while behind them, the three musicians, Tony Kelsey on guitar, mandolin and vocals, Matt Worley on Banjo, guitar and vocals, and percussionist Oli Jefferson, laid down backing that would have been mesmerising on its own. It would be easy to describe the set as all covers, even if Plant had recorded or performed several of these songs in the past, including on the Band of Joy album in 2010, but that wouldn’t do justice to how Saving Grace interpret the songs, creating their own sound and, with how unfamiliar these songs probably are to most of the audience, it’s as if we’re listening to something new, a terrific distillation of influences from country, blues and folk creating something

There wasn’t a lot of chat in the early part of the set, at least until, third song in, when Planty introduced Dylan’s ‘Gospel Plow’, but after that there were some wonderful stories about him supporting bands like the Hollies at this very venue, tales of Dudley’s much missed JBs, including dedicating Moby Grape’s ‘It’s A Beautiful Day Today’ to the late sound man Roy Williams, even a reference to sharing a sweet sherry with the legendary Black Country comedian Tommy Mundon, and, looking further afield, his travels around the States, discovering much of this music. It’s also noticeable that there’s no ego in this band; the publicity describes it as a ‘cooperative’, and Plant was often happy to step back and provide backing when the terrific Suzi Dian took the lead, and when the vocals were shared around the rest of the band.

There were so many highlights in the show, but particular mention for Suzi Dian’s singing of ‘Too Far From You’, a song from the Nashville TV series, and Donovan Leitch’s ‘Season of the Witch’; while she’s been gigging round the West Midlands for a while, her place in Saving Grace gives her a much deserved opportunity to shine in front of a bigger audience, she really is a huge talent with a stage presence all of her own, and I loved the moment when Plant threatened to explore some of the higher reaches of his legendary voice and she advised him that if he was going there, she was going home. There were also tremendous readings of the traditional ‘Satan Your Kingdom Must Come Down’ and Los Lobos’ ‘Angel Dance’, which ended the show. And, to answer the inevitable question, the only musical reference to Zeppelin was a segment of ‘In My Time of Dying’ at the end of ‘Satan, Your Kingdom’…and while it seems weird to refer to one of the greatest bands of all time like this, but this band genuinely doesn’t need to play that stuff, the music they play stands up on its own.

One minor quibble is that I would have liked Plant to give us a little more background about some of the songs, but I also really would be interested to know if there’s any plans for Saving Grace to record anything, whether there’s any inkling to write their own music, or even put together a collection of songs like these, although I gather Robert already has commitments to record another album with Alison Kraus and another Band Of Joy album, so maybe that’s unlikely. Either way, this was wonderful stuff, superbly sung and played. If this is the future of one of rock’s great vocalists, that’s just fine with me.