Blast from the past!

Twenty years on from its original release, one of black metal’s most influential albums has been remastered, repackaged and reissued by Napalm Records on 20 May 2016. Paul ‘which way to the fjords’ Castles sees if Satyricon’s Nemesis Divina justifies all the fuss.

Whenever conversations flow, usually over an ale or two, around some of the most influential records released in the darkened name of black metal then expect to hear Nemesis Divina mentioned in dispatches. The third album from Satyricon can be held aloft as a beacon of what black metal is or was about. So 20 years on from its release it’s no surprise to see the Norwegian generals reissuing a repackaged edition of one of their finest albums, this time through Napalm Records.

Let’s lay our tarot cards on the table right from the off and say this is a timeless classic, but before we get into the nitty and indeed the gritty a word or two about Satyricon themselves. Emerging from the Norwegian forests and fjords in the early 90s – OK, then Oslo if you must, Satyricon quickly established themselves among the second generation of Scandi black metal artists following on from the first wave built around such iconic names as Mayhem and Darkthrone.

Although recruiting a number of musos down the years for the purpose of live shows, the core of Satyricon has always remained in situ – Satyr (singer/guitar/bass/keys) and Frost (drums). For the record, Nemesis Divina features Nocturno Culto of Darkthrone guesting on rhythm guitar. 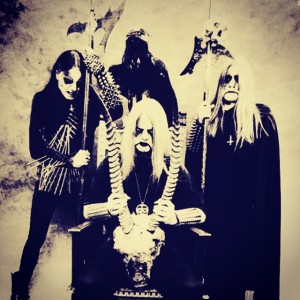 The Norwegian pioneers released a succession of classic albums in the 90s with Nemesis Divina at the top of the pile in most people’s book.

Satyricon have remained a constant force over the past two decades although in recent years their profile has faded a little. An absolutely epic live album/CD package last year Live at the Opera (reviewed here) really threw Satyricon back on the big stage, literally as well as figuratively, performing at the Oslo Opera House with the support of a full orchestra and choir. Slightly surprisingly only one track from Nemesis Divina actually appears on Live at the Opera but more of that later.

While new material is reportedly in the offing this year, Satyr and Frost did not want the 20-year anniversary of Nemesis Divina to pass by without acknowledgement. Thanks to this digitally remastered and superbly packaged anniversary edition there’s no chance of that, with Satyr himself looking after the remastering.

Nemesis Divina was notable for its artwork too, a brightly coloured smorgasbord of flaming images in contrast to what at the time was the more standard fare of shadowy corpse-painted figures lurking in graveyards.

The scene is set from the get-go with Satyr’s ‘This is Armageddon’ war cry before scorched riffs open the door to a black metal treasure trove. As well as having a voice that would turn chalk to dust, Satyr’s talent as a musician is paramount to the Satyricon success story.

The quality of guitar playing is mesmerizing and coupled with Frost’s prodigious ability from behind his drumkit, the quality of these seven tracks is little short of incendiary. When falling together in moments of sheer brilliance, such as on ‘Forhekset’ the impact is blinding.

Even that though must take a step back by the time we reach ‘Mother North’, a still iconic black metal song with a darting riff that just spirals relentlessly ever upwards with monastic choral chants adding a further dynamic to the tumultuous sound. Throw in Frost furiously launching his armoury of blastbeats and Satyr’s croaked cries and you have pretty much the whole package for a compelling black metal gem. ‘Mother North’ is, you won’t be surprised to hear, the one track from the album to appear on Live at the Opera, referred to earlier.

While ‘Mother North’ is understandably an often sited reference point for this album, the following track ‘Du Som Hater Gud’ is scarcely less commanding as it releases a seismic Satyricon surge fueled with pagan power before closing with a brief piano break tinged with medieval flavour.

Satyr’s rasping delivery is total black metal animosity and has probably been emulated countless times down the years. It’s pure evil in delivery and carries the kind of presence that would send a troll scurrying back under its bridge.

Satyricon’s songs are full of atmosphere, albeit with a structure caked in darkness but through Satyr’s startling guitar work Nemesis Divina remains an album that still possesses an inviting immediacy.

Album closer ‘Transcendental Requiem Of Slaves’ is the one track that stands alone, little short of an instrumental colossus which opens with a riff so acute you could build an algebra exam around it.

While perhaps not all of Satyricon’s output since the 90s stands up to cross examination quite so strongly, Nemesis Divina remains a masterpiece of the genre, and as such this remastered reissue would sit pleasingly within the collection of any black metal disciple.