The dark lord of naughtiness will be proud…

Just as Satan’s Wrath mainman Tas Danazoglou said in our 2013 interview (here), Die Evil is “exactly same style of music with same Satanic themes”. And when he said that the album will “blow your socks off!!!!”, and that “Your socks will suck your balls off”, those four exclamation marks were well-deserved and the promise of a sock suck like no other (what did I just write?) was no mere threat. Yep, those malicious entities that drive Danazoglou and his fellow devotees of the despicable – as well as Venom, Possessed, early Slayer, and Destruction – have served them well yet again.

Stamos K’s and V’s riffs are rapid and raging, the lead breaks are frantic and maniacal, the drumming is tumblingly pummelling, and the vocals are devilish, demonic and defiant. Same as on 2013’ Galloping Blasphemy (reviewed here) and the same as on 2013’s Aeons of Satan’s Reign (reviewed here). Nope, there’s not much different. The songs are just as great, if not better; the playing’s as tight as Steve Harris’s budgie-smuggling spandex; the riffs are sharper than the nails on Kerry King’s gauntlets; and the mischief and malevolence embodied in each evil track will certainly propel thee to hell, and quickly too. The dark lord of naughtiness will be proud. Let us once more bask gloriously in his glorious wickedness before we die fucking evil! 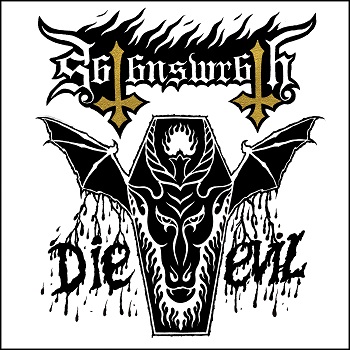