The last of Saga…or is it?

The end of a career, and indeed an era that has spanned four decades is recognised by the world’s greatest undiscovered (except by viewers in Germany) progrock band in this 2CD release, So Good So Far.

Saga appeared at the first RoA Festival in 2006, and returned in 2017 to mark their fortieth anniversary as a band, an important stop and an integral part of their “Final Chapter” world tour.

It is also being released as 2LPs and on DVD&Bluray.

What is immediately striking here is the quality of the sonics. The production values suggest some serious money has been invested (EU single market funding probably). The recording sounds dynamic, clear and pin sharp, yet full of movement and emotion.

Writing this off as Greatest Hits Done Live release would be doing the band a serious disservice. It would be a technically accurate observation, yes,  but there’s a purpose and an energy to the band’s live performance and always a tacit acceptance that the core fanbase want to hear the favourites, especially on a night like this.

And so the thread running through this 90 minute set connects all the key albums and tracks. The artfully shaped pop of the lyrically disturbing ‘Don’t Be Late’ plus the edgy and agitated ‘Help Me Out’ were the first two significant milestones on that forty year journey, both taken from their 1980 breakout album Silent Knight.

The band’s foundation always was the strength of the songwriting. The style and form of the music is almost incidental… the following year, Worlds Apart (1981) gave us the punchy and powerful hit singles, ‘On the Loose’ and ‘Wind Him Up’. Just about bookending this satisfying set, these two songs boosted the band’s expanding profile, confirming their position as real contenders.

There’s clearly a real affinity between band and audience. These are the faithful, the converted, ready to respond and participate in the ping pong banter. It gives the whole thing a welcome atmosphere of intimacy. As most of this takes place in German, only “alles klar” allows for an educated guess at meaning. It should come with subtitles. Probably the DVD does.

Saga are not a band who indulge in prolonged instrumental widdly diddly just because they have escaped the straitjacket of studio regimen. Over the piece, the articulacy of Sadler’s sharp, observational lyrics, and the machined precision of the whole band in lockstep are reason enough for the audience to savour each moment of the 90 minutes. It can appreciate the band’s onetime subtle shuffle out of the progrock arena into the rewarding world of pop with ‘Scratching the Surface’ and ‘Take A Chance’. Or with the radio hits, ‘The Flyer’ and ‘Careful Where You Step’ either in silence or in full voice.

You pays your money etc etc. 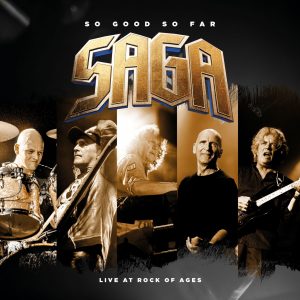