The work of duo ZK and LZ, Sacrocurse’s 2014 debut album, Unholier Master (reviewed here), was belligerent and uncompromising. Pummelling blow after blow of toxic bile and relentless wrath, it was nothing less than destructive. 18 months later and with a new addition to the line-up in the form of bassist SW, Sacrocurse have returned with this 4-track EP. Opening with bloodcurdling screams, it’s the perfect setup for what follows.

After taking their time to build up the atmospherics, Sacrocurse explore the darkest depths of black and death metal depravity to bestow upon us a diverse balance of merciless and abrasive murk. Like their 2014 album, it’s stripped back to the bone and raw. Riffs that shift between the ruthless and the crushing, drums that demolish with every hammered beat and a vocal that slays, the three tracks by the band are of the foulest, vilest and most vitriolic black death metal that your pennies could possibly buy. And though they give Bathory’s ‘Total Destruction’ the Sacrocurse touch, the distinct shift in production takes the sting out of what is otherwise a well-written and well-executed piece of work. Yes, play this and many a chapel will be destroyed… 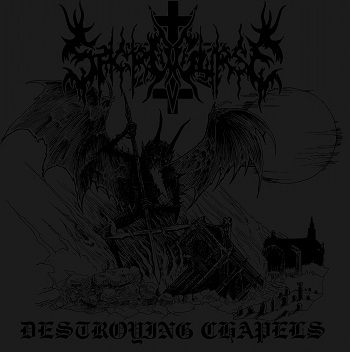