It’s almost impossible to contemplate the 40th Anniversary rerelease of ‘Permanent Waves’ without considering it in the context of the tragic and untimely death of Neil Peart, drummer and lyricist extraordinaire, in January of this year at the age of 67. Rush hadn’t played live since the R40 tour in 2015, and while Neil had always said that was his last tour, Alex Lifeson admitted not long after that the band were ‘pretty much done’, and if there were a lot of fans who secretly nurtured a hope that the band might one day work again, the loss of The Professor finally made the band’s retirement a reality in the most heart-breaking fashion, and  as this is the first official release from the band since, it’s all the more poignant in that this was a landmark album in the band’s career.

Geddy Lee is on record as saying that he’s getting fed up of it being the case that it always seems to be the anniversary of something, and in view of the fact that there was a 35th anniversary edition of ‘Permanent Waves’ as well, you can see his point. That was just a straightforward remaster, whereas this one comes with an extra disc of previously unreleased live tracks, recorded on the ‘Permanent Waves’ tour in 1980, and it’s probably this bonus that will prove to be the selling point for this release.

The album itself, though remains a joy, and unquestionably one of the best in the band’s career. The recording of ‘Hemispheres’, the previous studio album, had been difficult to say the least, and the band then took the chance to step back, and rethink their direction. They’d done the sci-fi epics that occupied a complete vinyl LP side, and while there was still room for the epics, albeit slightly shorter ones, with ‘Natural Science’ weighing in at a mere nine minutes, there was a freshness and directness about the newer songs that seemed to give Rush a whole new energy. ‘Spirit of Radio’ remains a genuine rock classic, and even now Alex Lifeson’s opening guitar raises the hair on your neck, the music as a whole was still ambitious, progressive even, yet also managed, to have genuine hooks and apart from its chart success, was an absolute joy live. ‘Freewill’ follows, again, a classic rock song, despite being in some seriously complicated time signatures, along with a wise yet provocative lyric, and a tremendous instrumental mid-section with one of my all-time favourite Lee bass parts.

‘Jacob’s Ladder’ is darker and heavier, with the band back in power trio mode, and harkens back to ‘2112’ and ‘Hemispheres’, as a longer song with a number of twists and turns. ‘Entre Nous’ and the more Ballad-like ‘Different Strings’ are lighter, and perhaps less memorable songs, but ‘Natural Science’ brings back an epic feel, capturing the same spirit of ambition as ‘Xanadu’ did on ‘A Farewell to Kings’. ‘Permanent Waves’ isn’t the longest of albums, weighing in at a comparatively brief 35 minutes, but there’s so much packed into the album, even now, it’s still always a rewarding and often exhilarating listen.

For the hardcore Rush fan, the obvious attraction in this particular edition will be the previously unreleased live tracks, recorded in London, Manchester and St Louis on 1980’s ‘Permanent Waves tour. While these tracks are unreleased, other recordings from this tour were included on the Exit Stage Left live album, and it isn’t in scrupulously correct setlist order, the brisk ‘Beneath, Between and Behind’ that opens this album was more than halfway through the real-life show, for example. But when the next tracks are ‘By-Tor’ and an epic ‘Xanadu’, it’s easy to sit back and just revel in the music. It’s not a great Rush live album, but it’s still a pretty good one.

For the real Rush collector, there is also a lavish box set, the ‘Super Deluxe Edition’ with CD and LP versions of the music, a hardback book of pictures and memories, a poster, a replica of the tour programme, replica laminates and lyric sheets, and there’s also an extra track compared to the standard CD, but currently at £149.99 on Amazon, that’s something very much for the hardcore fans.

When the band first came over to the UK, with the kimonos and Neil’s exuberant moustache, coupled with the sci-fi epics, Rush often had an exotic, other-worldly air in the late 70s, but ‘Permanent Waves’ was their first step along a new path that led to ever increasing respect and commercial success. But if this was a great album, what was to come was even better. 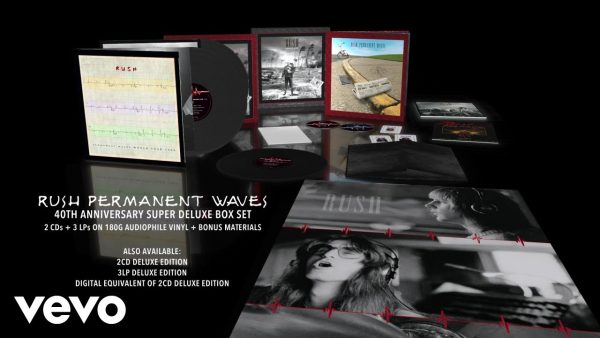