‘Five Glorious Nights – Led Zeppelin at Earls Court May 1975’ is compiled by Dave Lewis and captures the visual magnificence of the band though the photographic images of some of the finest rock photographers of the era – who were right there on the spot to capture rock history. The original version of the book was a sell out and has since become the most requested book in the Rufus range. 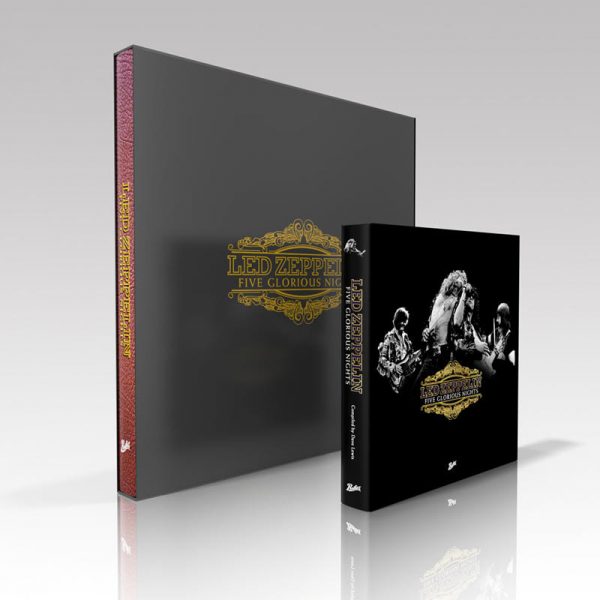 This new edition features 32 extra pages and new photographs from Jill Furmanovsky, Adrian Boot and Graham Wiltshire. This extensive collection of timeless images of Led Zeppelin on stage at Earls Court in all their regal splendour, are brought together in a deluxe Coffee table book.

Drawing from the archives of variety of photographers including Barry Plummer, Dick Barnatt, Ian Dickson, Michael Putland, Mick Gold, Gus Stewart and more – the book chronicles the sheer visual splendour of these historic concerts though an extensive collection of colour and black and white photos  – many of them rarely seen.

The photos are complemented by rare memorabilia and a written commentary that puts into perspective exactly why these concerts were some of the finest tthat Led Zeppelin ever performed.

The book is compiled by Dave Lewis – the highly respected Led Zeppelin archivist and author and editor of the long running Led Zeppelin magazine Tight But Loose. Dave was in attendance at all five of the Earls Court concerts.

‘Five Glorious Nights – Led Zeppelin at Earls Court May 1975’ offers a permanent visual record of a band at their absolute zenith – in a setting that truly justified their status as the world’s greatest live rock attraction.

This new edition is available into editions: a new 250mm square hardback format in a luxury, printed slipcase for a special pre-order price £59 and an Epic Leather and Metal Edition, measuring a huge 375mm square, bound in recycled Burgundy leather and supplied in a hand-made aluminium slipcase with a reproduction show poster. Only 150 of these are available at £450 each and includes the standard edition.

Both editions will ship in October 2022. At the end of August the prices will revert to £69 and £495 respectively.