Lost in the Eighties…

Revived and reinvigorated by Rock Candy Records, reissued on 11 July 2016, and redefined by Brian McGowan

1986. Two years earlier, when Rough Cutt‘s debut failed, commercially, if not critically, the band dropped off the rock’n’roll radar. They’d already lost Jake E.Lee to Ozzy Osborne and Craig Schnell to Dio. Now they were getting really careless, losing Craig Goldy to Giuffria and their A&R man to Capitol Records. Their own label, Warners, showing the sensitivity and understanding for which major labels were then well know, couldn’t then find a bargepole long enough not to touch them with. But in the nick of time a hero arose – their manager, Wendy Dio – and amazingly, she persuaded the label to give it one more try.

The band wanted Ted Templeman to produce, but he was unavailable, so they “settled” for Jack (Cheap Trick/Alice Cooper/Aerosmith) Douglas. This remaster’s liner notes, in which Paul Shortino relates the story – waiting for Templeman, working with Douglas – is a fascinating insight into the mind/s of raw, talented but naïve young musicians, and just how much influence the producer had in the studio. It also chronicles the band’s continuing downwards artistic spiral. You can almost hear them – band and producer, at label insistence – scrambling for the middle ground, halfway between the dumb and dumber party rock of ‘Rock The USA’ and ‘We Like It Loud’, and the polished, blues-hued arena rock aspirations of ‘Bad Reputation’ and ‘Take A Chance’, but not quite making it.

Paul Shortino’s grainy vocals, one part Jeff Keith, one part Joe Lynn Turner, readily slip and slide between hot blooded toughness and emotional vulnerability, easily distinguishing Rough Cutt from other bands in their peer group. Maybe Douglas could have made more of that, more often. Only on the relatively sophisticated, grown up rock of ‘Let ‘Em Talk’ where Shortino and guitarist Derak are in perfect sync, and on the album’s obligatory ballad, ‘The Night Cries Out’ with Shortino cranking up the emotion without resorting to chest beating histrionics, do we see a band who genuinely could’ve been contenders. The remastering serves them well, bringing out the warmth that gets masked by time, and the afore-mentioned liner notes are, as the cliché goes, worth the admission price alone. 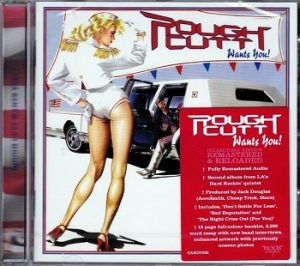