From the same mean streets that spawned Suicidal Tendencies Rotting Out are a quintet who are pushing hardcore to new levels of brutality. Their third full length, Ronin, is their first album for 7 years and it’s an incendiary affair that explodes with the release of pent up aggression.

Originally formed from the ashes of Dogpile way back in 2007 Rotting Out are a band who talk the talk and walk the walk. A three year hiatus, partly due vocalist Walter Delgado’s 18 month bid for transporting 700 lbs of marijuana, (hey, if you’re gonna get busted you might as well do it in style) saw the band on ice but they’re back and the preceding years of trauma have been distilled into 25 minutes of sonic rage. A wall of feedback builds tension that’s suddenly snapped as the guitars and drums detonate simultaneously to ensure opener ‘Vessel’ arrives like a tsunami. 97 seconds of pure hardcore fury makes ‘Vessel’ akin to a musical beatdown but they’re not all pure bludgeon. Breakdowns, staccato riffs and mosh parts are all packed in their punch but, in such a short time frame, it only makes things more immediate and intense.

Dropping a gear for a more measured approach, ‘Last Man Standing’ is a heavy, groove laden affair that swings like a huge wrecking ball as guitarists Alfredo Dario Pedrozo and Carlos Morales fire in tandem and with machine gun rapidity. Lead single ‘Stones’ is a rock aimed at those who come from safe suburbia yet pretend they’re from the street. Arriving like an avalanche ‘Stones’ is a wordy weapon with Walter’s vocals screamed from the heart over Benjamin Ruiz’ rumbling bass while drummer Jorge Cabrera ensures there’s a swing beneath the sonic fury. For this track (and the full album) Walter dug to the very depths of his soul and explored the dark recesses of his soul for inspiration and you can hear the cathartic rage with which he spits his words.

With a chugging riff that cuts like a steely scythe ‘Reaper’ is a no holds barred slice of hardcore very much in the vein of District 9 and Crown of Thorns. With “quieter” moments (just vocals and bass) acting as a foil to make the crushing sections weightier ‘Reaper’ is an intense experience. Neat production on the autobiographical ‘Prisoner’ encases the listener within walls of drums for a truly claustrophobic feel while ‘Still Her’ is sure to create havoc in pits worldwide. Fleet of foot, ‘Thief’ swings and slugs like a welterweight boxer as the vocals ululate with the guitars. A distinct lack of solos gives proceedings a punchy feel most notably on the violent and raw ‘Visceral’ which comes out with all fists flying and proves screamer Walter to be one of the genres most versatile vocalists.

On an album of short, sharp, snappy songs the 5 and a half minute closer ‘Boy’ is positively epic. Giving the band an opportunity to flex their musical muscles it’s time well spent as the build a song of monolithic proportions. Featuring Walter singing back as if through time it can draw several parallels, both lyrical and aesthetic, to Black Flag’s classic ‘Damaged I’. It’s a song that trades power for speed but it’s none the less punishing.

Ronin is a brutally real snapshot from the savage streets of San Pedro, Los Angeles. But remember Rotting Out live this life so you don’t have to. 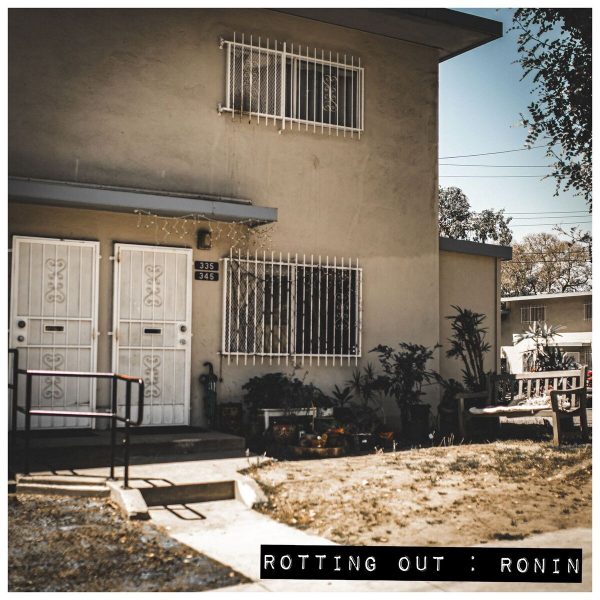