Germany’s Rotten Roll Rex (website; Facebook; Bandcamp) took a dump in our inbox recently and MR’s Jason Guest took it up himself to plough through the pungent and putrefying package. In amongst the malodorous mess were these three delights:

Well, I wonder what that ploppy lot could all be about. Let’s find out shall we…

What you see is what you get with the second full length dump from Czech’s Gutalax: poo-pulverizing, rectum-ripping, riff-grinding, pig-squealing odes to olid orifices and despicable derrieres. With fart sounds and poo splashes splattered across sixteen tracks in twenty-nine minutes, there are as many brutal, chunky and chugging riffs here as there are puerile poo jokes. I get the joke, but though the band is doing this for shits and giggles – as evidenced by the processed voice-from-the-brown-end vocals and the tongue-in-butt-cheek album and track titles – there are more than a few tracks here that seriously slam. So much so that were they to consider taking it serious, they could lay down some sturdy material. But as it stands it’s good for a shit-eating giggle or two… 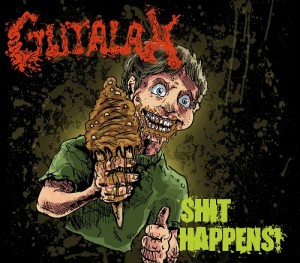 The romantically-named RazorRape have been hard at it since 2004. With two full lengths, three EPs and a split and a demo with such glorious titles as Unleashing the Shemales of Vengeance, Revenge of the Hermaphrodite Whores, and Demented Whores to their name, this Swedish death/grind duo are maestros of muck and mirth. 2015 and their fetid humour remains as filthy and pungent as was ever it was… or something like that. Erm, anyway, Orgy in Guts is pretty good. Gorily gnarled riffs follow one after another in a cavalcade of flesh-ripping death/grind as suitably unintelligible vocal grunts are spluttered, spat and spewed into the blooded mass of pummelled and pulverized tracks (they’re not “songs”). And with the quirky ‘Bitch Butcher Boogie’ mid(ish)-album and the tongue-in-punctured-cheek hard-rock delight ‘Tennis Racket God’ to bring humour to the horror, what more could one want from such a bacchanalian celebration of slaughter? 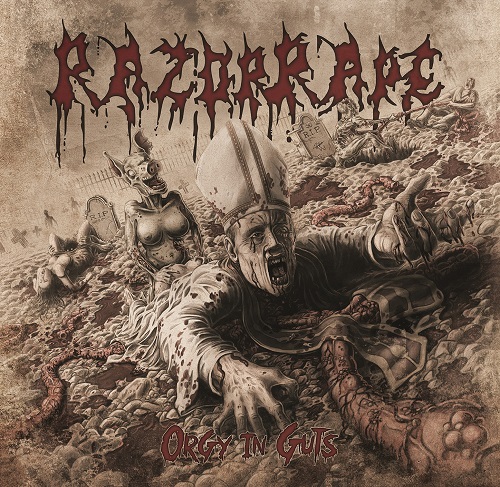 Disney will be doing the world a great disservice if they fail to use the snorted version of ‘The Imperial March’ that opens ‘Pornocchio’. And with that, Portugal’s Serrabulho take us on a journey into a paranormal galaxy brimming in irony, sarcasm, and nonsense with their own brand of “happy grind” as the soundtrack. Amongst the plethora of meat-grinding riffs, pig-squeal vocals, and gory sex-splatter-at-the-speed-of-light are the sounds of circuses, cartoon shows, what sound like Japanese kids chanting, superhero hardcore sex struggles, an acoustic ode to masturbation and twisted-and-toyed-with samples from Batman, Star Wars and Snow White. Eccentric as it is extreme, music to get pissed and slam to. May the foreskin be with you! 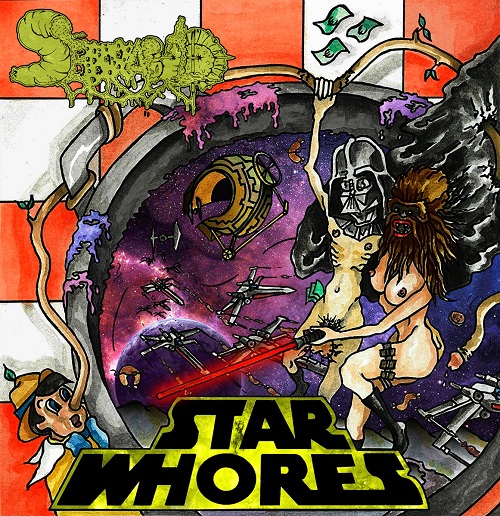