Born in Ballyshannon, County Donegal in 1948 Rory Gallagher forever changed the face of the blues with his unique tone. Having influenced everyone from Johnny Marr to Joe Bonamassa his legacy is assured yet his classic 1971 debut album Rory Gallagher (released on 3rd September and available to pre-order here) is often overshadowed by the rest of his discography (in particular Live In Europe and Tattoo) but that seems set to change with this lavish set which collects the original album alongside a host of radio sessions, alternate versions and a DVD recorded at the Pop Deux festival in 1971 which demands Rory Gallagher is re-examined and re-evaluated.

After disbanding Taste, Rory Gallagher auditioned some of the finest musicians of the time (Noel Redding, Mitch Mitchell) for his new project before settling on Belfast natives Wilgar Campbell (drums) and bassist Gerry McAvoy. They proved a wise choice as Rory Gallagher evidences a power trio firing on all cylinders and, as a statement of intent, album opener ‘Laundromat’ was a perfect calling card. Like all great guitarists (think Muddy Waters and Peter Green) Rory had his unique tone, a signature sound, and he weaves a dark spell on the lively ‘Laundromat’. With a riff so arresting it should be illegal it still sounds fresh and vibrant after five decades and I’m sure it will for the next five. Rory was far from a one trick pony and this album takes on many forms with ‘Just That Smile’ exploring some folk roots whilst ‘I Fall Apart’ tugs at the heartstrings with its late-night blues vibe.

Writing all the songs, this was very much Rory’s band but, nevertheless, Gerry and Wilgar were integral parts, and they provide a solid foundation over which Rory’s guitar lines sail. Just as Rory was inspired by the blues his influence radiates from this album as the fast shuffle of ‘Hands Up’ is where Thin Lizzy learnt their chops and I’m sure Zeppelin pillaged ‘Sinner Boy’ for ‘In My Time Of Dying. The sultry ‘For The Last Time’ documents Taste’s breakup and it’s these slower numbers where Rory Gallagher hits pay dirt. Overall, Rory’s operating under the maxim that ‘less is more’ and it’s not until we reach the seven-minute finale ‘Can’t Believe It’s True’ that the fireworks fly from his fretboard. Fusing jazz with blues Rory dazzles the listener with flashes of brilliance and set the bar exceedingly high for the rest of his career.

This set features a host of previously unreleased recordings, and this second disc begins with four tracks from the Tangerine Studio Session and evidence what a rich seam the band were mining. Of the four songs only ‘It Takes Time’ made it onto Rory Gallagher but the other three (and in particular ‘Gypsy Woman’ and ‘It Takes Time’) are far more bluesy and would signpost Rory’s career throughout the coming decade. Named after the studio where the album was recorded ‘Advision Jam’ is an angular and spiky instrumental, with plenty of neat time changes it’s a riff heavy monster that stomps from speaker to speaker and finds the band putting the power into power trio. ‘Laundromat’ makes a welcome return with a riff that never ages while two alternative versions of ‘Wave Myself Goodbye’ bring the disc to an enjoyable conclusion.

Like the second, this third disc contains several versions of the same songs. The casual fan will find it quite hard to sit through the six consecutive alternate takes of ‘Hands Up’, especially as there’s no radical departure between each version. However, for the aficionado they’re manna from heaven and provide a few different licks and offer an intriguing glimpse into the band’s workings. The shortened fifth take is an eye-opener and finds the band far from infallible and breaking down mid-song. Six songs make up the sixteen tracks here but what really makes this disc a winner is the studio chat that reveals a little of the bands personalities and makes for an important piece of musical history.

Rory Gallagher’s live prowess has been well documented (most notably on the aforementioned Live In Europe) and it’s a given that the stage was his natural habitat. The BBC may have many faults but 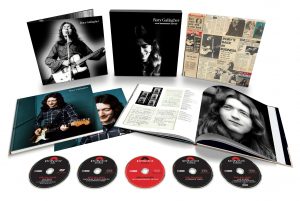 certainly not when recording bands and the first four tracks, from a ‘71 Sounds Of The Seventies session, sound crystal clear and an explosive ‘Laundromat’ is a definite highlight. Returning to Maida Vale later that year, this time for a John Peel Sunday Session, and these songs benefit from being performed in front of an audience. You can almost feel the waves of affection radiating between crowd and stage which gives cuts like the nine-minute, extended blues workout ‘In Your Town’ added impetus (and the bottleneck solo is worth the price of admission alone) whilst a cover of Otis Rush’s ‘It Takes Time’ ensures the boys bow out in style.

A live show originally filmed for French television Pop Deux, 1971 captures Rory & Co in all their glory. Captured at La Taverne de L’Olympia on 30th April ‘Hands Up’ is undoubtedly the best set opener ever written and it proceeds to whip up a capacity crowd to fever pitch. There’s something refreshingly honest about the band’s stripped back aesthetic; just three guys without airs or graces blasting out blistering blues tunes, and it has the benefit of bringing the songs to the fore. Rory trades electric guitar for acoustic but ‘Wave Myself Goodbye’ results in no loss of power and is rewarded with rapturous applause. Due to the age of the footage the film is slightly grainy but that only adds to the charm. If you weren’t lucky to see Rory live in concert, then this live show is the next best thing.

With input from the Gallagher family this timely reissue of Rory’s eponymous debut album has been produced with respect and with great attention to detail. If this set seems a tad overwhelming for the newcomer it’s also released as a slimmed down two disc set, a triple black vinyl collection and single orange vinyl containing the BBC live tracks. 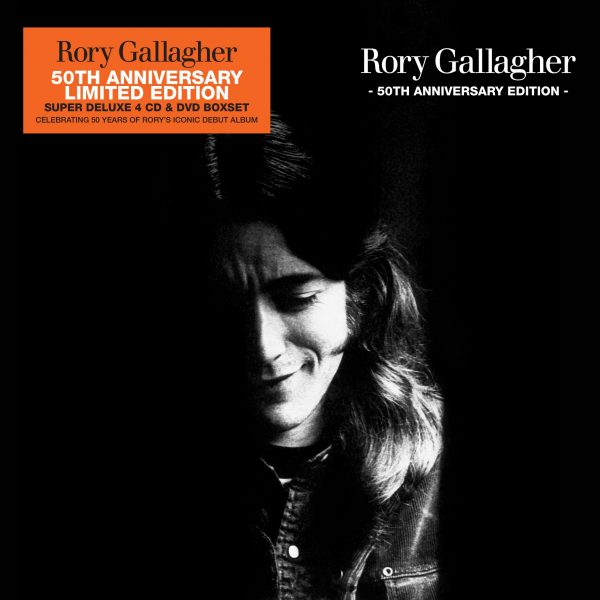