Some artists need little introduction. Anyone with a passing interest in the guitar and music made on a guitar will know who Rory Gallagher is, so let’s keep this brief. The Irish boy who played the blues. The wunderkind who, with Taste and his solo albums, tore through the 70’s and 80’s before the bottle cut his stratospheric tragically short. The musician’s musician. A blur of long hair, sweat, battered strat’s and, yes, check shirts.

A brief glance at a photo or any old clip of him tells you all you need to know. A grafter, a man of the people. One of us, no velvet dragon-print suits for Rory. A guitar, an amp, a stage and a pint of best. A musician who belonged, who lived and breathed and flew on stage. Any stage, anywhere. It’s where he was born to be. His studio albums were great but they were facilitators, gifting him his ammunition to play live. And the live albums…they were the gold. ‘Live! In Europe’, ‘Irish Tour ’74’ – some of the greatest blues rock ever recorded. Blueprint setters.

So we can be eternally grateful to Chess records for discovering and releasing ‘Check Shirt Wizard’. A full, 20-song double album with songs recorded at four venues (London, Brighton, Sheffield and Newcastle) on Gallagher’s 1977 UK tour and sequenced to play like an average ’77 setlist. It’s a beautifully recorded and mixed thing of joy and can sit confidently with his aforementioned live albums, it’s that good.

We’ll try to avoid rambling on about too many particular tracks and take it as a whole, as a gig. A quick tune up and we’re off, Rory immediately hitting his groove. The rhythm section are solid, dependable. There are no fireworks (they leave that to Rory) although the keys add depth and character. By track three the band are relaxing, hitting their stride, stretching out. The first appearance of Gallagher’s trademark fiery slide guitar takes things up several notches and from here on in it all gets increasingly frantic and powerful. By the time we get to ‘Walk On Hot Coals’ Gallagher is firing on all cylinders, his band now matching him, step for step. Glorious.

After a brief mid-set break Gallagher returns…with his acoustic guitar. Now a live staple of virtually every big name rock band, we are treated to a stunning 5-song acoustic mini set. We get cowboy songs, ragtime blues, scorching Elmore James slide and finger picking that would give Richard Thompson a run for his money. Gallagher is equally good, if not better, on acoustic guitar. Discuss.

And then it’s a riotous run for the finish line. The pre-acoustic set sweaty intensity is back, in spades. We finish with a 10 minute ‘Bullfrog Blues’ – replete with drum and bass solo’s, and, finally, a freewheeling two song encore. Listener and audience are left elated, drained and gobsmacked.

Gallagher’s reputation can only grow with this. You can only wonder why this material wasn’t released at the time, the recording and sound mix are faultless and the performances are gold standard. It’s also interesting to note when this tour took place. 1977…the year of punk. Despite being a guitar hero, Gallagher never copped any flack from the safety pin brigade. Probably because he wasn’t seen as an aloof dinosaur. He wasn’t playing enormodomes – he was in town halls and clubs, where he could see his audience and they could see him. He definitely also had a punk ethos – wearing onstage what he wore on the street, setting up with an amp and just fucking playing. Just listen to this album, the energy and fire contained within these grooves is equal to anything The Clash put out on a good night.

For Gallagher fans this is a no-brainer. For the uninitiated and the curious, this is as good a place to start as any. And from here on in you’ll be hooked. There’s no going back now. 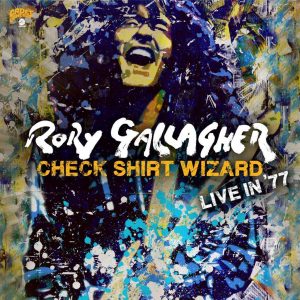