Rolling Stones legend and all round diamond geezer Ronnie Wood is the subject of a fascinating new in-depth documentary, ‘Somebody Up There Likes Me’, directed by Mike Figgis, the Oscar nominated director of the brilliant ‘Leaving Las Vegas’, which has just been released on DVD and Blu-Ray by those good people at Eagle Rock Entertainment.

Most people know the basics. Cheeky London chappie forms various bands and almost inadvertently ends up in at least three epochal bands – The Jeff Beck Group, The Faces, and, of course, The Stones. Getting equal attention is Ronnie’s work as an artist and his ‘eventful’ personal life along the way.

It’s a relatively short film (104 minutes) and is painted in Ronnie-esque minimal brush strokes. From his early life (and hard-drinking family) through to the discovery of the guitar, which was in Ronnie’s words, the “most practical tool” for expressing himself, to the formation of The Birds (not The Byrds).

We keep going back to Wood’s art, he is often shown sketching and painting, moving slowly, confidently, with almost hypnotic brush strokes. Indeed, Damien Hirst is interviewed at one point, relating with frank honesty how he helped get Ronnie into rehab in what basically amounted to an intervention.

Ronnie’s life long struggles with, let’s be honest, any and all addictive substances, is never glossed over. AA, rehab, meditation (“I had to go through it to get to it”) – it’s all here. Wood admits that it was the rituals associated with the various drugs that he found the hardest to quit. As he says, he was never an unhappy guy, there seemed to be no obvious demons, he just found sobriety hard.

Musically, it’s fascinating. While in the Birds he clearly had his sights set on Jeff Beck. When that fell apart the Faces were born (enter Sir Rod) and from there his eventual gatecrashing of the Stones was almost a foregone conclusion. Wood somehow knew he would eventually end up in the band. He still seemed to be in the Faces when he joined the Stones and it’s fascinating to see that neither Wood nor Stewart, to this day, seem to agree on who broke the band up.

The clips used are minimal and well chosen, one song from each band, and nothing that any casual fan will not have seen already. There is however, some lovely footage of Ronnie’s recent Chuck Berry themed gigs which resulted in last year’s fine live album (plus there are a few extra tracks in the DVD extras).

But that’s fine, this film isn’t about the flash or the rock ‘n roll, it’s about the man. A man who knows exactly how lucky he has been (“I was in the hands of destiny my whole life”). He’s a jobbing artist and a lovely guy. The talking heads are minimal and well chosen – just his closest circle (although when your best mates include Rod & Keef the soundbites are always going to be great). The interviews are filmed in bare rooms, up close. They’re intimate chats, warm and loving. It all ends with Ronnie, his acoustic guitar and a whispered version of ‘Breathe On Me’. A gentle portrait of a supremely loveable guy. 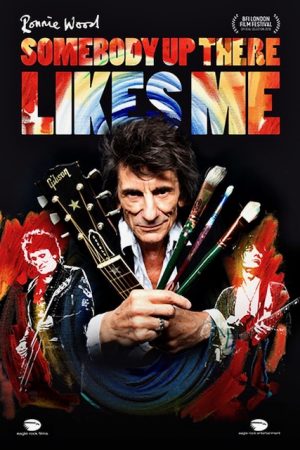