A very brief series of dates before Romeo’s Daughter vanish into seclusion to begin work on their next studio album threw up the chance to visit one of the Midlands’ newest venues, Eleven in Stoke on Trent, and I’m bound to say that first impressions of the club were very favourable. It’s very accessible and, once inside, ticks all the boxes for a venue of its size. The PA is excellent, someone has put a lot of thought into the lighting, and I like that the bar is separate from the hall itself. The only thing I’m not sure of was the line of tables down the middle of the hall from the edge of the dance floor in front of the stage, which made getting around difficult when the hall began to fill up, but overall, somewhere I’ll definitely be returning.

Tonight’s support came from Hand Of Dimes, fronted by ex-Skin vocalist Neville McDonald, and judging by the number of Skin t-shirts in the crowd, he already had a sizeable percentage on his side. Backed up by former Kooga band mate Neil Garland on keys and Colin Edwards, once part of prog band Magenta’s touring line up, on guitar, they began their set in front of a growing crowd, with ‘Looking at You’ setting the tone for the set straight away. 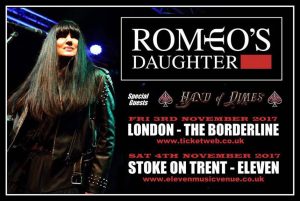 The band’s sound is a bluesy hard rock, with nods to Bad Company and early Whitesnake, giving McDonald, also playing guitar himself, chance to show his vocal chops straight away. It was interesting that two slightly slower songs toward the middle of the set, ‘Stranger in My home Town’, and ‘Jacob’s Ladder’, for some reason worked a lot better than the earlier, rockier songs and gave the set that bit more impetus, with the crowd getting livelier by the minute. The band were even able to induce a singalong in ‘Pinstriped Arrogance’ and set closer ‘Sail On’ and drew a really ovation at the end of their fifty minute set. No Skin songs, to the obvious disappointment of some, but on this showing Hand Of Dimes are a pretty good live band in their own right, well worth keeping an eye on.

Singer Leigh Matty took care to point out that this would be the last show for Romeo’s Daughter in 2017 and for a while after that as the new album would be taking priority, and from the start it looked as though the band wanted to make the most of it. Starting out with an enthusiastic ‘Tripping Out’ and an even livelier ‘Attracted to the Animal’, they had the crowd with them from the off. One thing that struck me from the start was that Leigh herself seems to get more and more into performing each time the band play, going back to that first reunion show at Firefest in 2009, where the band seemed a little tentative, as if nervous about playing live as a band after so long a hiatus. Tonight she was dancing and bounding round the stage, engaging in some chat with the front row, even holding the mic out to the crowd for the singalong parts. Even when she had some issues with her in-ear monitors, she laughed, pulled them out and carried on singing, saying she preferred using ordinary monitors anyway. Such an engaging front-person as well as being a great singer.

Although the band are currently operating without a full time keyboard, the remaining players, guitarist Craig Joiner, bassist Ed Poole and drummer Andy Wells are still an impressively tight unit. A lot of the set was as it has been since their last studio album, Spin, was released, but they did include a couple of songs that haven’t been played very often, including ‘Have Mercy’, ‘Enemy’ and ‘Already Gone’, but if the crowd were unfamiliar with these, when the band hit the home straight with a tumultuous ‘Heaven In The Back Seat’ and the sensuous ballad ‘I Cry Myself To Sleep’, which includes one of Leigh’s very best vocals performances, then finishing the main set with ‘Inside Out’, before a terrific encore of ‘Wild Child to wrap things up.

For a first visit to Eleven, this was a pretty satisfying gig to start off with, two good bands and an enjoyable evening all round, in some very nice surroundings, that I definitely won’t be averse to checking out again.