It’s Autumn and some things, even in this wild and crazy year, never change. We are firmly in the ‘it must be time for some new archive Stones product’ time of the year. And sure enough, as well as the recent deluxe ‘Goats Head Soup’ reissue, we now have ‘Steel Wheels Live’ – a CD/DVD set capturing the legendary band on their Atlantic City stop of the (also) legendary 1989/90 Steel Wheels tour.

Due to tensions between Mick ‘n Keef, the band hadn’t toured since 1982 and so this new outing was a big deal at the time. The Stones took this tour seriously, it was a huge corporate undertaking, pretty much writing the book for mega stadium tours from there on in. The staging and effects were immense, nothing on this scale had been seen at the time. Musically too, the band were on point. 12 weeks of rehearsal had gone into this, hundreds of possible songs practised. It was the Stones, they were back but could they still cut it? A lot was at stake.

But, from the opening seconds, you’d never know it. Boom! Pyros! and we’re off into ‘Start Me Up’ – the band are looking cool, within moments Jagger is running up and down the walkways, working the crowd. It’s well filmed and the whole thing is slick, polished and professional. The song choice, too, is interesting and not totally obvious – ‘Bitch’, ‘Harlem Shuffle, ‘Undercover’ – all payed with fire and heart.

Then, as quite often happens these days, it’s time to roll out a few guest stars. First up are Axl and Izzy who join the band for a debut live airing of ‘Salt Of The Earth’. It’s a great live version, nicely scruffy and laced with fine slide guitar from Mr. Wood. Axl does his usual sidewinder dance thing while Izzy looks quietly overjoyed to be hunkered by  the drums with Keef ‘n Ronnie.

The set list continues to be a finely balanced selection of deep cuts, hits and (then) new tracks. ‘Honky Tonk Women’ fires up and out come the enormous, “what’s wrong with being sexy?” inflatables. Then it’s time for more guests – Eric Clapton joins the fray for ‘Little Red Rooster’ and then a genuine legend takes the stage. Replete in killer suit, hat and shades, John Lee Hooker launches into ‘Boogie Chillun’, his guitar drowning everyone else out. Keith Richards looks to be somewhere approximately close to seventh heaven.

And then we’re into the final stretch – the hits. The band are tearing it up, chopping out riffs, weaving around each other, hitting home run after home run (we’ll just quietly ignore Jagger’s interpretive dance during ‘2000 Light Years’). They’re firmly in the ‘we can do this epochal shit without even breaking a sweat’ zone now. Late period Stones have rarely sounded better.

So there we are, just shy of three hours, it’s a vintage gig. And note must also be made of the heroic amount of fags smoked by messrs Wood and Richards throughout. As with most Stones ‘From The Vault’ releases, it comes in a staggering variety of formats – from a plant-based disc wrapped in hemp to a gold-plated disc delivered personally in an Aston Martin Valkyrie (which you get to keep) by the ghost of Brian Jones (which you don’t). If you’re wondering if you need another Stones gig in your life, you do.

*My only reservation comes with the sound quality, in particular the mix. I had not recieved a physical copy of the DVD to review and so had watched a stream of the concert. Hopefully this was a rough mix as Keith’s guitar was virtually inaudible for the majority of the show, and we all know just how vital Keith’s over amplified engine room is to any Stones gig. Hopefully this will have been rectified for the actual release. 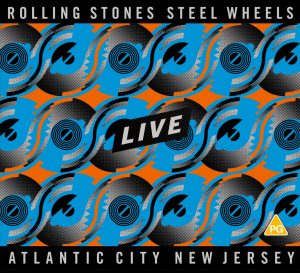