One of the UK’s greatest singers is striking out across the UK this June and July. Roger Daltrey will present a celebration of his solo material and The Who’s classic songs, plus take part in a live Q&A with the audience during the shows.

And this week, Roger announces his touring line-up of crack musicians who will join him:

Doug Boyle – Guitar – played guitar for several years with Robert Plant, has played for Nigel Kennedy and in recent years has been a member of Caravan.

Geraint Watkins – Keyboards – Welshman and king of the keyboards, has played for Dave Edmunds, Paul McCartney, Van Morrison, Mark Knopfler and a host of others.

Jody Linscott – Percussion – is a regular on Who shows and solo shows for both Roger and Pete.

Billy Nicholls – Backing vocals – has been a major part of The Who family for so many years.

Steve ‘West’ Weston – Harmonica – one of Britain’s top blues harp players – featured on the ‘Going Back Home’ album which Roger made with Wilko Johnson. Steve is also the harp player of choice for Mud Morganfield (Muddy Water’s son) when Morganfield plays shows in the UK.

Ben Townshend – Drums – son of Simon T, who has played on several of Simon’s albums and albums by The Cornerstones.

Katie Jacoby – Violin – who else?! 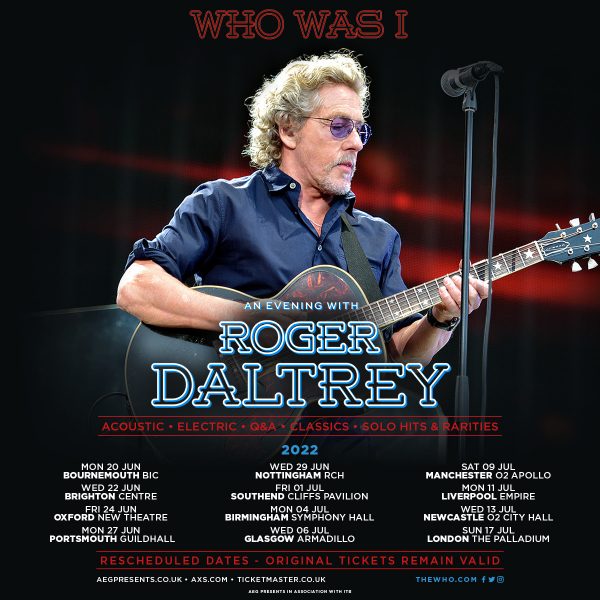 Roger’s special guest on all twelve shows will be Leslie Mendelson.  The Brooklyn based artist released her latest album ‘If You Can’t Say Anything Nice…,’ in 2020.

She has collaborated with Jackson Browne and the Grateful Dead’s Bob Weir and so impressed The Who that they invited her to open two shows at Madison Square Garden.

“The truth is singers need to sing,” says Roger, “use it or lose it. The pandemic brought home to me what an important part of me singing is and it’s made me determined to get back onstage asap.

“It’s also clear that live music is an important part of all our lives, something to free us from the groundhog days that life has become.

“Throughout my life I have sung with so many great musicians, from the heavy Rock of The Who and Wilko Jonson, to the Irish lilt of the Chieftains. On this tour I want to take the audience on a musical journey through my career as a singer, with a show of songs and sounds that explores and surprises.

“I look forward to having closer contact with my audience than festivals and arenas allow. Leaving time to chat. It’s important to get our road crew working again, without these guys the halls would go silent.”

Roger’s solo career began in 1973 with the single ‘Giving It All Away’ which reached number 5 in the UK charts. It was a track from his first solo album ‘Daltrey’, released that same year, which he followed up with 8 more albums, including 2018’s acclaimed Top 10 UK charting ‘As Long As I Have You’.

As frontman of The Who, one of two remaining founding members of the British rock institution and perhaps the most exciting live bands of all time, Roger is rightly recognised as the one of the great vocalists.  Timeless songs like ‘Won’t Get Fooled Again’, ‘Substitute’, ‘My Generation’, ‘Behind Blue Eyes’ and ‘The Kids Are Alright’ are just some of The Who’s greatest hits.

For the last 21 years, he has also been a patron of the Teenage Cancer Trust, a charity that builds specialised wards for teenagers with cancer in the UK. in 2000, Roger had the idea of setting up the first show at the Royal Albert Hall by ‘The Who & Friends’, with ticket sales and revenue from a DVD and CD raising over £1.2 million. The Teenage Cancer Trust at the Royal Albert Hall concerts have continued for the last 2 decades. In February 2005, Roger was awarded a CBE by the Queen at Buckingham Palace for his services to music and good causes.