Three very different UK music legends: Robin Trower, Maxi Priest and Livingstone Brown, have come together to create the United State of Mind, and their self-titled album is released on Manhaton Records on CD and Vinyl on 5 March 2021. Three distinctive, trademark sounds and styles have dovetailed and fused together to create an album that is compelling, soulful and essential.

A pioneer in his genre, Maxi Priest is an iconic British reggae vocalist, with Jamaican heritage, best known for creating that potent blend called reggae fusion. Maxi has just been nominated for a Grammy for Best Reggae Album for ‘It All Comes Back To Love’.

Virtuoso rock guitarist Robin Trower found fame with Procol Harum, then went on to lead his very own power trio The Robin Trower Band. His album ‘Bridge Of Sighs’ has sold millions of copies worldwide.

Livingstone Brown is a talented producer/mix engineer and musician. As a session and touring musician during the 80s and 90s, Livingstone worked, separately, with both Robin Trower and Maxi Priest. He’s also worked with artists such as Ed Sheeran, The Waterboys, Tina Turner, Bryan Ferry, Kylie Minogue, De La Soul, ABC and Bill Withers.

What brought this remarkable trio together was a chance meeting at Livingstone Brown’s studio in Brixton.  “When Robin first met Maxi”, Livingstone said, “I thought this cannot end well. Wow, this record is proof I was so wrong!”

Maxi Priest puts it this way: “Three different minds coming together trying to create a unification that we can give as a gift to the world. We wanted to come together to do something positive. I’m overwhelmed and proud of this album. It’s all live instrumentation: fully organic music. This album is for music lovers: all genres.” 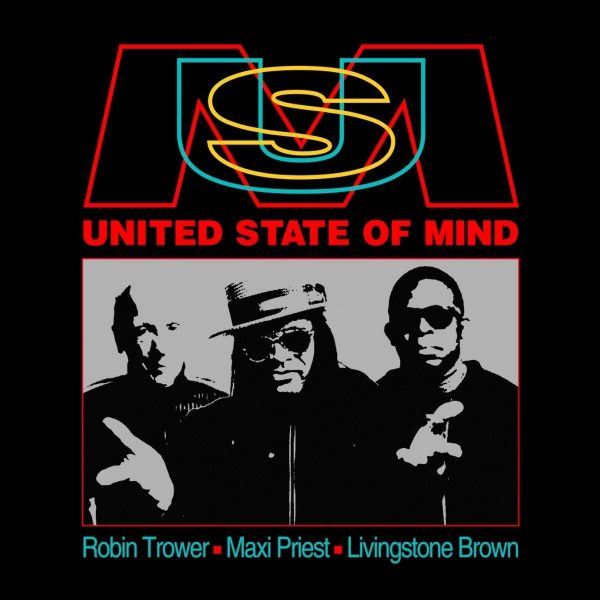 “USM was one of the first pieces of music that I came up with for Maxi,” reflects Robin Trower, “As soon as he heard it, Maxi had the lyric idea and everything started to fall into place from there. Working on the album with Livi and Maxi was a complete joy from beginning to end.”

‘United State of Mind’ is rich in commercial appeal and so smooth that it’s virtually frictionless. The third track on the album, ‘Are We Just People’, has just been included on the soundtrack of a new film, just released, about Muhammad Ali, called ‘Ali’s Comeback’. Like Ali did, United State Of Mind pack a punch.