Despite a long career stretching back to 1982 Irish vocalist Robin McAuley has never really found a solid place in the annals of melodic rock. Starting out with hard rock band Grand Prix but most noted for his time in and out of Michael Schenker’s bands since 1986 but, unbelievably Standing On The Edge is only his second solo effort (the first being Business As usual in 1999). McAuley currently finds himself having something of a purple patch with Michael Schenker Fest’s Resurrection (2018) and Revelation (2019) plus 2020’s supergroup project along side Jeff Pilson (Dokken/Foreigner), Matt Starr (Ace Frehley/Mr. Big) and Reb Beach (Winger/Whitesnake) Black Swan’s release Shake The World all being released to much critical acclaim.

This long awaited second solo album finds McAuley’s voice still in absolutely awesome form and with songwriting partnerships with, amongst others, his old Grand Prix comrade Phil Lanzon this was always set to be a hard rock masterclass and it certainly delivers. Alongside McAuley the band is completed by multi-instrumentalist Alessandro Del Vecchio (Hardline/Sunstorm), guitarist Andrea Seveso (Black Rose Maze) and drummer Nicholas Papapicco (Andy Thorley). As always Robin McAuley hits the ground running with opener ‘Thy Will Be Done’ with his powerful voice in full evidence. The title track continues the onslaught with it’s massive riffs and a hook that could land a great white. The masterclass continues with a lesson in power ballads during ‘Late December’ and despite the drop in pace the vocal shines through during a standout chorus and it’s a gem which would have been huge in the early/mid 80’s. With his take on the ever popular theme of looking back at better times and finding the singer in nostalgic mood on the Tommy Denander (Radioactive/Alice Cooper) co-write ‘Do You Remember’ it’s another straight ahead melodic rocker. Stepping up the pace once more on ‘Say Goodbye’ this time driven by the power of the Del Vicchio/Papapicco rhythm section proving this project is very much a band effort. Second Denander co-write ‘Chosen Few’  is another real pounder and brings to mind peak period Saxon or UFO. Turning the lights down to enhance the mood on ‘Run Away’ and returning us to candlelit evenings with your girl by your side this is a proper arena rock ballad in the ‘Winds Of Change’ mould.

Guest guitarist Howard Leese (Bad Company/Heart) also co-wrote ‘Supposed To Do Now’ and his input makes this one of the most commercial track here. It’s difficult to believe in these days of nursery rhyme pop that a band can come up with such consistently great tunes but on Standing On The Edge the quality just keeps coming with ‘Wanna Take A Ride’ and then when McAuley teams up with Lanzon (Grand Prix/Uriah Heep) to co-write ‘Like A Ghost’ it gets even better. Heavy on Del Vecchio’s Hammond organ the track is lifted to another level and makes you dream of a full on Grand Prix reunion someday soon. The only way to follow that is with a pure hard rocker and that is exactly what is delivered from closer ‘Running Out Of Time’ with all guns blazing this is a band on a mission to create an unforgettable power rock experience. Frontier have prided themselves with flying the melodic rock flag for many years and with this release they truly have a modern day classic.

Unfortunately even once restrictions are lifted a Standing On The Edge Tour is still unlikely due his commitment to any Michael Schenker Fest rescheduled tour dates but this would be a huge shame due to the quality of this material. I guess we’ll just have to satisfy ourselves with another great album to go alongside Shake The World, Samurai and Perfect Timing within our collections. I think it is definitely time to reevaluate Robin McAuley’s place in melodic rock history. 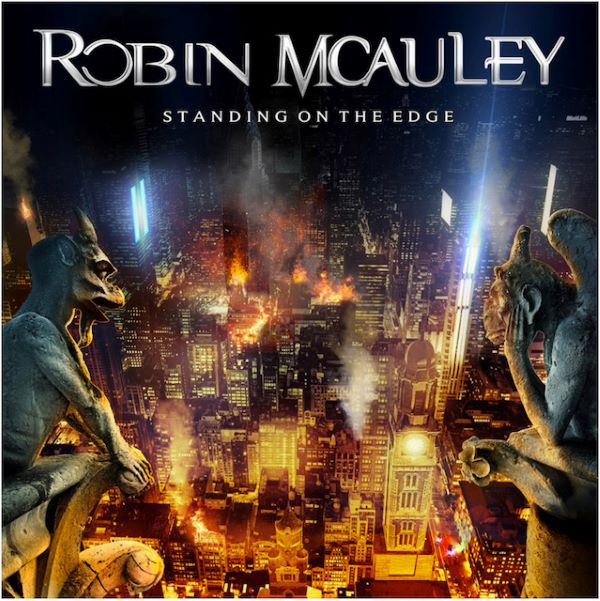