The Ritual Begins At Sundown…sounds slightly redolent of Jim Morrison’s Dyonisian promise that the ceremony was about to begin. And so it should, Robby Krieger was , after all, the guitarist with The Doors. A guitarist of huge influence and creativity, bringing a unique, expressive, jazz-inflected sound to that legendary, iconic, boundary pushing band.

And here we are, in 2020. Krieger is still going strong, doing his thing, man. Having played with, influenced and been sampled by, well, everyone, he’s still jamming and playing with the same undiminished enthusiasm. Even a global pandemic can’t stop him – ok, it may have put him on hold briefly, this album was due to be released in April, but we’re finally here, it’s arrived.

And what do we get. Laid back LA blues? Oblivion seeking anti-establishment rallying cries? Slide guitar laced psychedelic explorations of our outer limits? Erm, no, in a word. Krieger has hooked up with an esteemed group of Frank Zappa alumni (which may give you an idea of what to expect) to record an album of electric jazz fusion.

Krieger was always a jazz fan, having been a habitue of LA jazz clubs with John Densmore in their pre-Doors days. It’s in his blood and let’s face it, he’s at the point where, if he wants to make a jazz fusion album, he can make a jazz fusion album. He’s a living legend – he actually hung out with The Lizard King! He’s earned the right.

‘The Ritual…’ is Krieger’s first solo album in 10 years and was recorded in his analogue Horse Latitudes studio in LA. It consists of 9 originals and one cover…which we’ll get to in due time. Within seconds it’s apparent that this is a full-on jazz album with very few concessions. Right off the bat it’s quirky, angular and chock full of keys and horns. Yes, Krieger’s guitar is there but it’s just part of the band. It’s all smooth, mellow and resolutely stuck firmly in the late 70’s – early 80’s. There are groovy Hammond and retro sax solos and when Krieger finally emerges from the mix it’s for a classy, tasteful, slightly fuzzed solo – the man still has his chops!

And on it goes. ‘Slide Home’ has, as you might expect, that trademark Krieger velvet-wrapped slide sound. He gives himself more room to stretch out here and has just enough dirt in his tone to keep you listening. There are also, however, maraca’s, bongo’s and jazz flute. Smooth jazz is still here to stay.

‘The Drift’ (see above) is so jazz it hurts. It’s a slightly out there version of a NY 80’s sitcom theme tune, although you can always rely on Krieger to do something interesting – I’m sure there’s the merest snippet of Santana in his solo. And on we go. The band sets up a riff/motif before they stretch out and take turns soloing, and it’s all done in the best possible taste, the “cats” heading off (mellowly) into the far reaches of jazz improv. The saxaphones even reference ‘A Love Supreme’ at one point. Nice.

A great deal of this album is smooth. Very smooth. Goatees, neon and boat drinks ahoy. Vaguely reminiscent of Weather Report, it’s as inoffensive as jazz can get and the band are clearly having a (calm) ball, nodding sagely in appreciation of each other. There are occasional shifts in theme. A Piano and guitar led take on The Doors ‘Yes, The River Knows’ is, perhaps, the non-jazzoids way ‘in’ to  this album, shorn, as it is, of the more extreme jazz trappings of the rest of the album. Krieger briefly amps it up for a killer solo.

‘The Hitch’ sees the band hit a funkier vibe, with wailing Hammond and a cool guitar/sax duel before hitting a bit of a ‘Starsky and Hutch’ head of steam. The one cover here, a take on Frank Zappa’s ‘Chunga’s Revenge’, almost sees the band rocking out. That classic dirty Zappa riff finally appears and things become nicely heavy. Zappa’s influence gives the song an edge. The tone is dirtier, the band ready to rumble…although still in a jazzy context. Krieger howls. More of this would have been appreciated.

So there we go. Whether or not you enjoy this will very much depend on your capacity for retro smooth jazz and how much of a Doors fan you are. This is resolutely stuck in the past, we don’t even manage to edge towards the nineties in terms of musical timelines. It’s not at all dangerous, in any way. Jazz fans will enjoy it, it’s a warm, consummately played and produced jazz fusion album. Those of a rockier persuasion will, however, find this a trickier proposition and may struggle to find a way in.

You can never fault jazz musos for musicianship…it’s just that they’re playing jazz. The album could have done with a bit more of Zappa’s weirdness and perversity but, having been Jim Morrisons bandmate, you can’t blame Krieger for wanting a quieter life. You feel that this is the kind of music he loves (and lives) to play. He never really convinced as a rocker, he always sounded like a (heavy) jazz player in a killer psyche band. He’s not giving a damn about being relevant, he’s legendary enough to be in the position to do exactly what he wants – which is exactly what he’s doing. 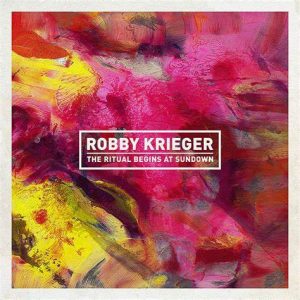