I did wonder how long it would be before Rob Zombie released a DVD of his live show. Seeing him in December 1998 at Wolverhampton’s Civic Hall – the same stage upon which just two years previously he had said that White Zombie weren’t about to split up – in support of his first solo album, the show was incredible. Zombie and his cohorts blasted through a set comprised of a sort of “best of” of White Zombie tracks and material from Hellbilly Deluxe. The stage set was part horror show, part carnival, with Rob and his musicians fresh from the grave, dust and detritus trailing behind them as they stomped around the stage to Zombie’s trademark B-movie metal grooves. With White Zombie dead once and for all – bassist Sean Yseult forming surf and horror rock bands, drummer John Tempesta sticking with Rob Zombie for two albums, and guitarist J Yeunger disappearing almost completely – that album and this tour meant that the corpse upon which they had been feeding was still very much alive and undead.

Sixteen years in and we have his first concert film. Sixteen tracks in eighty one minutes, this features everything we know of Rob Zombie all over it: an ostentatious stage set, elaborate stage costumes and makeup, dry ice, pyro, robots lurching around the stage, horror film imagery on huge video screens, B-movie/Grindhouse graphics, plenty of shots of topless women in the crowd, and industrial-techno metal-stomping grooves laced with singalongable – and nonsensical – lyrics. And while there is not a single moment when something isn’t happening on stage, with two ex-members of Marilyn Manson at his side – guitarist John 5 and drummer Ginger Fish – Zombie and his ghoulish cohorts are masters of the stage.

The set list draws mainly from the two Hellbilly… albums and his latest, Venomous Rat Regeneration Vendor (reviewed here), and features White Zombie classics ‘Super-Charger Heaven’, ‘More Human Than Human’, and ‘Thunder Kiss ‘65’. The material from his solo works is well-chosen, the tracks being amongst the better of his solo career, and the three White Zombie tracks are going to be with us forever (and as much as we’d like to hear a few tracks from La Sexorcisto… or Astrocreep: 2000, they are long dead, sadly). The inclusion of Grand Funk Railroad’s ‘We’re An American Band’ – a song more suited to Poison and Kid Rock – is as toe-curling as it was on Venomous Rat Regeneration Vendor. If only a homage to American music, it’s no better than fawning. But with John 5’s tooth-picked rendition of ‘The Star Spangled Banner’ a la Hendrix to introduce it, if intended as a political statement, it’s a pretty poor one. But Rob Zombie’s conservative metal has never been as challenging as Rammstein’s or early-Marilyn Manson’s iconoclasm, has it? Nope, this is all spectacle. All show. And what a show! A few extras – interviews, videos, etc. – would have been good, but as it stands it’s pretty good. 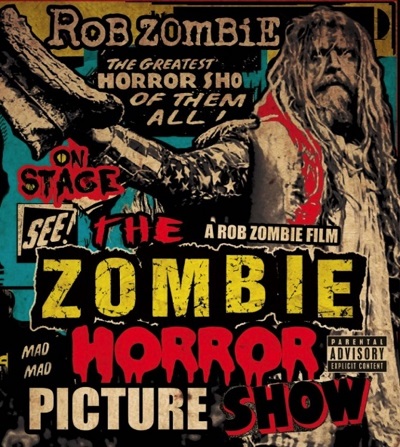