The heavy metal holy grail that leads to the Hobgoblin New Blood Stage at Bloodstock is a long and winding road, most commonly navigated by bands through the assorted heats of the nationwide Metal 2 The Masses competition. Masters Call though did things their own way… as they told Emily Castles. 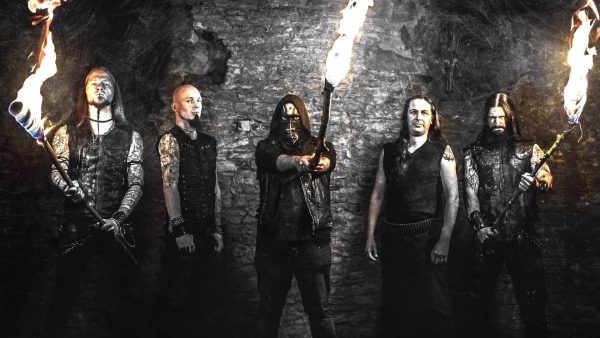 MR: Many congratulations on winning a space on the New Blood stage – how does it feel to be playing Bloodstock?
Awesome! We are so looking forward to smashing it! Our journey as a band so far has been a lot tougher behind the scenes than we expect people will likely realize, so it’s fantastic when our hard work and dedication pays off!

MR: Bloodstock’s announcement said that the band impressed them via a CD submission – how did that come about?
Well essentially the timing was right, we had finally finished our debut EP Morbid Black Trinity and we wanted people to hear our music, so we thought why not send it to Bloodstock.

MR: Had you been hopeful or confident with the submission?
To be honest we weren’t really expecting to be offered a Bloodstock slot, but of course there was that hope it would at least put us on their radar.

MR: The band formed in 2014, had you applied to M2TM before?
No, although some of us have previously been in bands that have entered M2TM.

MR: How pleased were you with how the Morbid Black Trinity EP turned out?
We believe in our music and we put a lot of time and effort into making our debut release the best it could be. We are pleased with what we finally emerged with but there was always that question at the back of our minds as to how our debut songs were going to be received by the metal community. It was going to be the first impressions of our music and our sound. But the reviews and feedback have been excellent and we got slots at Incineration Fest and Bloodstock off the back of it, so that reassures us that we must be on the right path!

MR: Are you currently working on anything new in the studio?
We are currently writing our follow up album which we hope to finish in the first half of 2020. It’s difficult for us to pinpoint how long it’s going to take as we again want it to be the best it can be and there are always so many unexpected obstacles along the way. Morbid Black Trinity set the bar and we want to raise it.

MR: You recently played London’s sold out Incineration Fest, headlined by the almighty Mayhem – how was that?
That was an awesome day out, and to be a part of that line-up was an honour! It felt intense, with a lot of bands moving about and the venue packed out – just enough time to get on stage and hit it hard!

MR: Have you got any other festivals planned?
We are in some talks and have some yet to be announced things in the works for next year.

MR: You’re from the Black Country, the home of metal – how has this influenced you as a band?
We grew up on the likes of Sabbath and Priest who have been huge inspirations and influences on our lives and paved the way for future generations to come. As extremely proud of our metal heritage as we are, we feel it gets an underwhelming level of celebration and recognition here in the home of metal itself. The recently opened Black Sabbath exhibition is a step in the right direction but we want Birmingham to stop holding back and explode heavy metal everywhere! 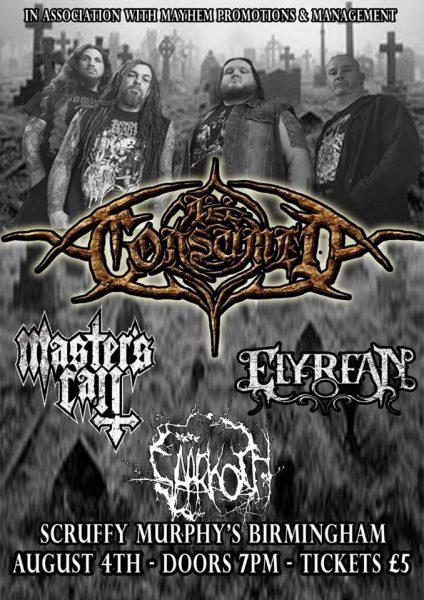 MR: Are you fans of Bloodstock – have you been as punters in past years?
We have all been to Bloodstock in various past years. We all attended in 2018 – Judas Priest, Watain, Emperor and Cannibal Corpse – some serious influences to us among that line-up!

MR: What can fans expect who may be seeing you at Bloodstock for the very first time?
We play our music with full force and passion enhanced with some visual aesthetics. If you know our EP expect to hear it along with some future forthcoming material. It’ll certainly be worth checking us out at Bloodstock if you are into our type of music! We’re also at Scruffys in Birmingham a few days before we head to Catton Park. (see above)