Vinyl is back. Boosted by the boomer generation and Record Store Day (plus, y’know, better sound quality), vinyl sales have grown year on year since 2007. Vinyl now accounts for at least one in every eight albums purchased in the UK across both digital and physical formats. What better time, then, for those canny folk at Eagle Rock to release some of their best selling live titles on limited, special edition, heavy coloured vinyl.

So, in this first batch of releases we have Black Sabbath, Motley Crue, Aerosmith, Kiss and the vinyl premiere of 2016’s live ‘Memories In Rock’ from Ritchie Blackmore’s regrettably brief reactivation of Rainbow. This release is drawn from two outdoor shows in Germany. The band, in this incarnation, included his Blackmore’s Night rhythm section, Jens Johansson (Stratovarius) on keys and his good lady wife, Candice Night, on backing vocals.

The set list, spread over three glorious green discs, is every Blackmore fan’s dream, a pretty even mix of Rainbow and Purple classics, played with all their pomp and glory intact. No millennial truncated versions here, oh no, it’s all essayed with lashing of 70’s bombast. Prog-tastic solos, drum breaks, endless sing-alongs, they’re all here.

So there he is, onstage, finally plugged in again and teasing us with a guitar snippet of ‘Over The Rainbow’ (see what he did there) before launching into ‘Highway Star’. It’s a good version, the sound is nice and full, the band play well. Blackmore however, plays warily, cautiously. The furious abandon of yore is missing, replaced with a careful attention to detail. No longer does it feel as if the music could collapse into an amp-destroying supernova of noise. Blackmore does, however, deploy his secret weapon, namely vocalist Ronnie Romero.

Who he? Romero was plucked from Spanish band Lords Of Black and the reason for his surprise inclusion is immediately clear. He has a voice, a voice and a half. It’s no easy feat filling in for Messrs Gillan, Coverdale and Dio but Romero seemingly takes it totally in his stride and hits a home run. He’s astonishing and the audience seem to accept him totally. Ok, so sometimes his vocals come across more as impersonation rather than interpretation but hey, that’s ok, we’re all here and listening because this is a retro-fest, we want it to sound like it used to.

Blackmore wisely decides to give us exactly what we want. There are no jazz odysseys here. They play everything – well, not everything, we’d be here for weeks, but pretty much everything you could wish for in an epic 150 minute concert. ‘Mistreated’ is huge, Romero nailing the Coverdale-isms while Blackmore plays a tasteful extended blues solo before launching into a grandiose finish. ‘Since You’ve Been Gone’ oddly, is a two minute teaser, a snippet before launching into ‘Man On The Silver Mountain’, during which Romero namechecks RJD to appreciative applause.

And the hits keep coming. ‘Perfect Strangers’ is immense and note perfect, ‘Long Live Rock ‘N’ Roll’ amps up the audience participation and then we’re into the home stretch and a volley of Purple classics. ‘Smoke On The Water’ has nothing held back, there’s nothing low key about this and that riff never fails to hit the spot. Interesting to note that it’s when tackling Gillan that Romero seems to struggle, but who wouldn’t struggle to hit those high notes in ‘Child In Time’.

Who knows why Blackmore suddenly, unexpectedly decided to plug back in again but let’s be glad he did. This recording and these shows certainly don’t sound like some sort of contractual obligation – all involved sound like they’re having a blast. I guess it was all to do with ticket sales and bums on seats but you do have to wonder why the shows were billed as Rainbow, rather than, say, ‘A Night With Ritchie Blackmore’ – especially when you consider the 50/50 Rainbow/Purple split.

So yes, a tad restrained compared with the fiery, dangerous brilliance of ‘On Stage’ or ‘Munich ’77’ but, to be fair, Blackmore was 71 at the time. It was just good to have him back. And these vinyl editions are the perfect Christmas gift. 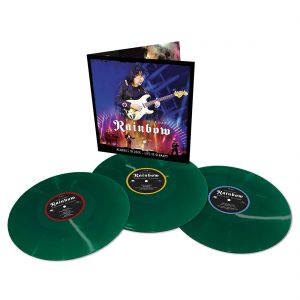