The Heavy Metal genre has such narrow bandwith that even at its peak, it seldom broke out into the mainstream. Some bands, like Riot, who could’ve, didn’t. But they enjoyed the loyalty of a sizeable coterie of fans, who stayed with them through thin and thin. Fan demand for “new product” has continued unabated well into the new millenium. More especially for material recorded when founding member and guitarist, Mark Reale was still alive and kicking.

Thus this well packaged 6 CD boxset, licensed from The Mark Reale estate, with quality liner notes from ubiquitous industry know it all (in the nicest possible way), Malcolm Dome.

Dumped by Capitol after 2 albums, Riot signed for Elektra in 1981, releasing Fire Down Under (see our review here) that same year, and took off on the road to promote it. The box set begins on stage at My Father’s Club, New York that same year, showcasing the band’s enthralling fusion of NWOBHM and seventies’ hard rock. The audio is limited of course, but nevertheless the sheer full burn velocity of the title track, ‘Outlaw’ and ‘Swords And Tequila’ scorch a path through the cool evening air, and go down well with an enthusiastic crowd. Three “Rehearsal” tracks from Reale’s basement tapes come as a bonus, including a blazing cover of Montrose’s ‘I Got The Fire’.

Two years later, the band’s major gig at the legendary Wolfgang’s Theatre in San Francisco was recorded, clearly using some decent equipment. They were touring Born In America with “new” vocalist Rhett Forester. It was his second and last album with the band. 17 solid tracks here. Interesting to hear Forester singing on the biggies from Fire Down Below, cleverly added to broaden the set and increase appeal.

The following month, January 1984, California was just a speck in the rear view mirror as the band geared up for another full blown Riot gig a thousand miles away, in Albequerque, New Mexico, with an almost duplicate set. Even down to the same ‘Alter Of The King’ mis-spelling.

Another two years on (1986) and we’re back in California. This time the band are live at the world famous Roxy. This is one of the better CDs in the boxset, the sound is good and the band hits the ground running. The set is heavy with material from their 1982 album, Restless Breed, Forester’s first album with the band. A regression that is nonetheless welcome, and it goes down well. Two cool ‘bonus’ demos on this disc.

Jump another two years and we’re in Texas. Riot had just released their 6th album Thundersteel, with only founding member Mark Reale remaining of the original lineup. They work through the new material, peppering it entertainingly with classic “oldies”. Previously unknown vocalist Tony Moore is on fire here, a great find. He went on to enjoy a six year stint with the band. Two more demos are added, making it an overall total of 17 demos/bonuses across the 6 discs.

The boxset is rounded out with a full disc of demos, and is what you might expect. For afficionados, hearing just how one or more of their favourites began life can be an exhilarating experience, and they get to do it 10 times here.

For hardcore fans of this influential band, a carefully curated 6CD extravaganza will be manna from heaven. For others, if nothing else, it’s powerful proof that in the world of rock’n’roll, drive and perseverance are massive components of success, and after that, it’s sheer luck. 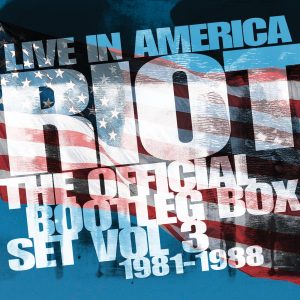