Back in 2010, former The Almighty frontman Ricky Warwick played a gig at upstairs at The Garage in support of his Belfast Confetti solo album. During that evening he mentioned that he was hoping to shortly make an announcement concerning his future plans. Within 24 hours the big news was out and he had been selected as the new front man in Scott Gorham’s re-imagined Thin Lizzy. This project later morphed into Black Star Riders with whom Ricky has now released four studio albums. During his tenure with BSR he has continued his solo career both live and in the studio. While BSR are on an enforced break from touring due to the world situation he has produced his latest offering When Life Was Hard And Fast. Calling upon old sparing partner Joe Elliott (of Def Leppard/Down N’ Outz fame who co produced Tattoos and Alibis Ricky’s first solo album), Andy Taylor (Duran Duran/Power Station), Dizzy Reed (Guns N’ Roses) and Luke Morley (Thunder/The Union) as special guests along with a core band of BSR band mate Robert Crane on Bass, Xavier Muriel (Buckcherry) on Drums and producer Keith Nelson who also supplied additional guitar clout.

Opening with the title track ‘When Life Was Hard And Fast’ featuring Joe Elliott on backing vocals this is another of Ricky’s wonderful lyrical life stories studying the Rock n’ Roll lifestyle with just a hint of Lizzy twin guitar.  ‘You Don’t Love Me’ chugs along with Luke Morley’s signature guitar driving it with the punchy “You Don’t Love Me Anymore” line powering it’s chorus. ‘I’d Rather Be Hit’ is lighter fare but still has the anthemic chorus lines that are his calling card with Andy Taylor supplying some stunning guitar breaks. Next up is ‘Gunslinger’, a blistering cover of the Mink De Ville’s 1977 B-Side. ‘Never Corner A Rat’ sits firmly in The Almighty’s territory as it is hard and fast (just how life was). In total contrast ‘Time Don’t Seem To Matter’ the most personal song on the album being written for his daughter Pepper who duets with her father on the track. Wordy and emotional despite it’s low key nature an absolute highlight of this album. The pace doesn’t ease for long as what follows is ‘Fighting Heart’ probably the most BSR (there had to be one) track here. Back with another special guest as Dizzy Reed appears on keyboards/organ on ‘I Don’t Feel At Home’ a track which hints at the performers Springsteen/Petty influences. Keith Nelson introduces Still Alive with his slide guitar being the absolute star of this hard hitting tune which I predict will become a live favorite. ‘Clown Of Misery’ is the albums cowboy song with just an acoustic guitar around the campfire and the perfect lead in to the final hoorah! current single, ‘You’re My Rock ‘N’ Roll’. Introduced with a short phone conversation before sledgehammering the album to a close with a hail of spit and Sex Pistols.

Available as a standard CD (reviewed here), Deluxe 2CD (including the “Stairwell Troubadour” covers album), Vinyl or limited (100) cassette. Whether you are a fan of The Almighty, Black Star Riders or his solo material you are sure to find something of value here. I guess I should leave the final words to Mr. Warwick who says of his latest release, “This album is a statement of my intent, a love of rock n roll, songwriting and playing from the heart. The only way I know how. I’m so honored I now have the opportunity to share it with all of you!”. Nuff said. 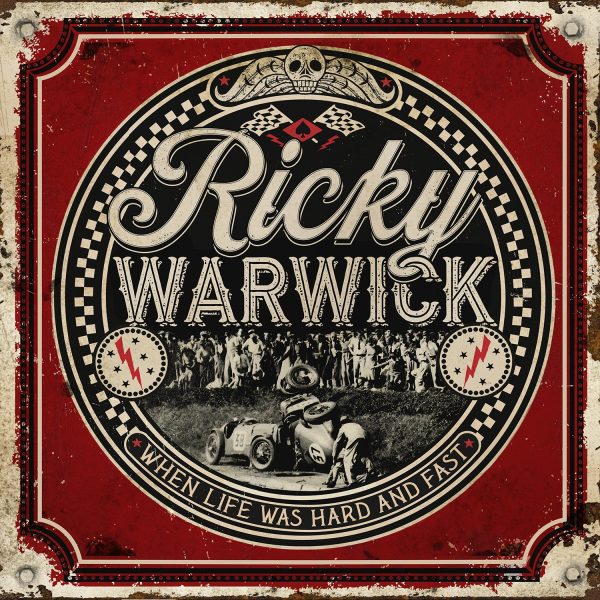