More than homage, more than veneration, Rhino Bucket’s 1990 self titled debut is a complete and utter surrender to antipodean rock’n’roll. A howling dive into the AC/DC rabbit hole where perversely, everything is exactly as it seems. Riffs sear the air with deceptive, white hot simplicity, rhythms keep the beat like some huge, thudding metronome and the hero of the piece, Georg Dolivo, wields his straining, strangled vocals like a welder’s torch burning through heavy metal. Diehard fans of the Oz band anointed ‘Rhino Bucket’ the best AC/DC album the band never made.

Here, cutting edge remastering lifts the album out of the nineties. It’s been a long time since standouts ‘One Night Stand’ and ‘Train Ride’ thrilled fans and critics alike with tight as a drum, white knuckle performances. Uncompromising, hard edged, these and others… ‘Blood On The Cross’, ‘Inside/Outside’ … display the very rigour that had gone missing from vast chunks of the previous decade’s rapidly expiring corporate rock. These reissues sound like they were recorded yesterday. Dynamic, streamlined, powerful.

The title of follow up album ‘Get Used To It’, is a tongue-in-cheek riposte to those AC/DC fans who just didn’t get it. It added further distance too, between the band and the eighties, hammering home the message with a brutal directness, delivering another 11 songs with an urgency that suggested the music had to be committed to tape before a stampeding horde of redundant bandana rockers tore down the studio.

At the time, surprisingly, the album was judged as inferior to the debut. Not so, this is marginally stronger. You can hear the band hitting their stride, assured, confident in their ability to write sturdily melodic rock songs – again jointly written by band members, Dolivo, Greg Fields and Reeve Downes – fuelled by thick cut riffs and razoring guitars. ‘Beat To Death Like A Dog’ thrums like a machine, propelled by a stuttering, insistent axe motif. ‘She’s A Screamer’ belongs on ‘Back In Black’. And ‘Ride With Yourself’, is as user friendly as snarling, edgy rock can get.

The band had hooked up with producer Terry (Led Zeppelin/ZZ Top/Molly Hatchet) Manning for this follow up. He stretched the band’s lean and mean rock’n’roll into corners previously unreached, emphasising the elemental, losing the hint of garage rock you could hear on the debut.

Taken together, these two albums took Rhino Bucket out of AC/DC’s slipstream and launched them into flight on their own terms, and the remasters do them justice. A rock generation later, technology has added a not unwelcome colour to the band’s monochrome, minimalist hard rock. And if they once sounded like some other band, now, looking back, they sound majestic, like they’d seen it all, done it all. Little wonder they are still going strong, 26 years later. And in true Rock Candy fashion, both reissues are crammed with new photos, commentary and extended credits. 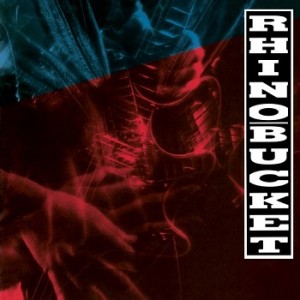 Get Used To It