Arriving like a thunderbolt splitting the earth Hampshire’s Dundera immediately commandeer the stage and captivate an ever increasing audience. Playing original tunes ‘The End of Days’ is a slice of sonic warfare whilst the following ‘The Daylight Ending’ brings to mind classic Maiden with its galloping bass and twin guitar attack. Several new tracks are debuted of which ‘We Born’ points to a bright future and ‘Blood Red Sky’ which cascades like crimson tears and ensures a frantic finale.

Something of a local gig for Serpentyne who throw early music, folk and Celtic rock into a metal cauldron and the resulting alchemy is both heavy and ethereal, similar to what Candlemas achieved on Epicus Doomicus Metalus. Opening with ‘The Dark Queen’ there’s a strong song sensibility that holds their different influences in a cohesive whole as ‘Angel in the Night’ is garnished with medieval guitar flourishes. With its fine bagpipe solo ‘Bring on the Storm’ has an earthy folk vibe and a military muster that rallies the troops for tonight’s headliners. 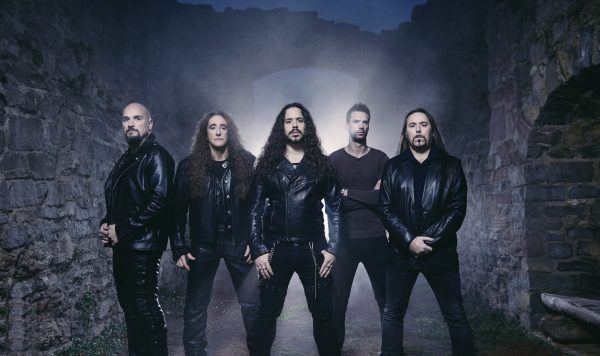 With an intro tape (‘Abyss of Pain’) that encroaches like a Viking longboat an almost unbearable tension builds as we await headliners Rhapsody Of Fire. That tension is finally broken, like a lightning bolt illuminating a night sky, when the band hit the stage and launch into ‘Seven Heroic Deeds’. It’s immediately obvious why Rhapsody Of Fire were such an important band in the development of symphonic metal as all the essential ingredients are here from the impossibly fast shredding and noodling to Giacomo Voli’s operatic vocals and Alex Staropoli’s neo-classical keyboard textures. Tonight’s set celebrates two of the bands albums and we begin with a run through of their latest opus The Eighth Mountain. ‘Master of Peace’ and ‘Rain of Fury’ are unleashed in quick succession and, with their fantasy lyricism, would make the perfect soundtrack for Advanced Dungeons and Dragons. ‘White Wizard’ is dedicated to the memory of Christopher Lee and it’s not until we reach fifth track, the emotive ‘Warrior Heart’, that the band ease up on the frantic pace. Foot firmly back on the pedal for ‘Clash of Times’ and ‘The Legend Goes On’ before the epic and theatrical ‘The Wind, the Rain and the Moon’ caps a near perfect rendition of The Eighth Mountain.

Celebrating its 20th anniversary this year is the Tales of a Hero’s Fate album and Rhapsody Of Fire focus on five prime cuts from that record beginning with ‘Dawn of Victory’. ‘Triumph for My Magical Steel’ is the stuff air-guitar dreams are made from and it’s impossible not to get caught up in the sheer joy that Rhapsody Of Fire bring to their performance. ‘Dargor, Shadow Lord of the Black Mountain’ is the seed from which fully fledged concept albums grew as a high octane ‘Holy Thunderforce’ brings the set to a rather dramatic conclusion. Of course they return for three well earned encores and it’s with a trio of tracks hand picked from their impressive back catalogue. ‘The March of the Sword’ (from Power of the Dragonflame) throws down the gauntlet while on ‘Land of Immortals’ (Legendary Tales) the guitar and keys interlock like duellists before ‘Emerald Sword’ (Symphony of Enchanted Lands) lands the fatal scything blow. 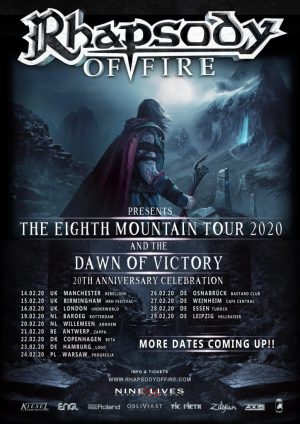 Seven Heroic Deeds
Master of Peace
Rain of Fury
White Wizard
Warrior Heart
The Courage to Forgive
March Against the Tyrant
Clash of Times
The Legend Goes On
The Wind, the Rain and the Moon
Dawn of Victory
Triumph For My Magic Steel
The Village of Dwarves
Dargor, Shadow Lord of the Black Mountain
Holy Thunderforce
The March of the Sword Master
Land of Immortals
Emerald Sword