In a case of art imitating life there are a plethora of crushingly heavy bands who are sound tracking the current zeitgeist and perhaps the cream of the crop are French post-hardcore heroes Resolve. Formed in 2016 and now signed to German label Arising Empire they’ve left a tantalising trail of singles and we finally arrive at their debut full length, Between Me And The Machine, and it’s an album that, many years in development, should gain Resolve some global recognition.

Resolve, after the briefest of introductions, make their intentions crystal clear with the musical explosion that is opening salvo ‘Beautiful Hell’. The title of this album is proved to be perfectly apt as Resolve play with mechanical precision; like a finely tuned engine ‘Beautiful Hell’ beats metronomically while the synths, surgical and glacial, add to the feeling of automation. However, don’t take their machine-like quality as soullessness because Anthony Diliberto’s vocals are delivered with raw emotion and this makes for an intriguing tension of opposites, and that’s just one of many that echo throughout this album. Like the eye of a tornado, the quieter section that swirls in the midst of ‘Beautiful Hell’ provides a moment of calm and, making good use of light and shade, acts as a foil to make the heavy passages which bookend the song all the more crushing.

Musically, Resolve are a band who place themselves in the post-hardcore bracket yet, while that’s certainly true, there’s enough heaviness here to ensure the band has crossover appeal that’ll sit well in the metalcore camp. ‘Seasick Sailor’ was the first single culled from Between Me And The Machine and it succinctly encapsulates that meeting of genres; it’s powered by hardcore fury but is tempered by a nuanced groove more inline with metal. But, for all their brute force Resolve never lose sight of melody and song structure and ‘Sing Me To Sleep’, far from being narcoleptic, is an earworm that’ll entwine itself around your brain, just as Diliberto’s vocals weave around the guitar lines. With an impressive range Diliberto uses his voice like an instrument, tailoring his style to suit each song and he unleashes some throat-shredding screams on D.G.G.R.S.’.

There’s an overarching aesthetic to this release that gives Between Me And The Machine the feeling of a concept album. It reminds me a little of Fear Factory’s Demanufacture in that respect; the songs are linked thematically and tells of a not-too-distant, technocratic future. The musical equivalent of a novel, each song is a chapter, separate and divisible, yet they hang together as a cohesive whole. The title track is a monolithic tower, almost progressive in its structure and, punctuated by huge white spaces, takes on different forms, as if a shapeshifting reptilian. Between Me And The Machine is an engaging listen and you may feel windswept by the time you reach album closer ‘Forever Yours’. More organic than the preceding cuts ‘Forever Yours’ is a slow burner that builds to a grandiose conclusion and makes for a fitting finale but suggests there’s much more to come from this French three-piece. 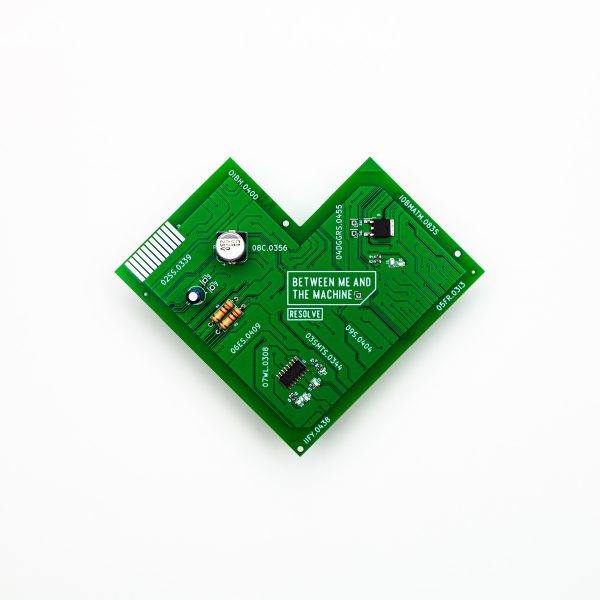