A golden jubilee should be celebrated in style and that’s exactly what Renaissance have done with this lavish set Ashes Are Burning: 50th Anniversary Live In Concert. Recorded at the beautiful Keswick Theatre with The Renaissance Chamber Orchestra this live recording collects some of the bands best known tracks (plus a few surprises) to create the perfect career overview.

Renaissance, and their quintessentially English sound, found a spiritual home in the United States and the waves of affection that greets opener ‘Carpet Of The Sun’ are really quite tangible. With a feeling of morning and rebirth it seems ‘Carpet’ is the perfect introduction and, like the dawning of a new day, it gradually comes to life. From the jaunty riff that heralds its arrival to the closing crescendo it finds the band in fine fettle. The cinematic ‘Ocean Gypsy’ follows and it’s here that The Renaissance Chamber Orchestra come into their own. It works precisely because it’s not overplayed, the Orchestra is brought to the fore at certain moments and the result is a sound that’s multi-layered and textured without being cluttered or fussy.

Some bands age better than others and time has been very kind to Renaissance and Ashes Are Burning evidences a band who’ve matured like a fine malt liquor with both ‘Running Hard’ and ‘Midas Man’ being presented, by the addition of The Orchestra, as bejewelled and opulent. Likewise, vocalist Annie Haslam has lost none of her power and her five octaves are put to good use on ‘Symphony Of Light’ as she perfectly blurs the line between classical and rock and her vocal display renders ‘Symphony’ simply stunning. In the first of two guest spots founding member Jim McCarty joins the band for a rendition of ‘Island’. A highlight from their debut album this incarnation of Renaissance do ‘Island’ justice and bring this disc to a suitably grandiose conclusion.

Picking up where the first disc left off ‘Opening Out’ (from their 1974 masterpiece A Song For All Seasons) is music designed to transport you to another dimension and, aided by a huge, expansive production it takes you there in style. It is a theme that’s continued on ‘Day Of The Dreamer’; like falling through a wormhole (think Alice In Wonderland) it’s a song of many suites that juxtaposes loud and quieter passages, each acting as a mirror to reflect and highlight the other. Otherworldly and slightly sinister ‘Mystic And The Muse’ takes a trip to a dark underworld with Annie unleashing some ear shattering shrieks and while much progressive music becomes befuddled in a cloudy dreamscape ‘Mystic’ remains vital and strangely catchy.

Renaissance were never afraid to stretch their musical wings and the final two tracks both veer towards the epic. However, despite their lengthy running time they feel neither unnecessarily elongated or forced. In fact they seem to alter the very fabric of time; a hypnotic nature means ‘A Song For All Seasons’ passes in the blink of an eye. Jim McCarty returns to the stage for a very special finale in the shape of ‘Ashes Are Burning’, the title track from their 1973 album, it constantly shape shifts to incorporate a series of solos including a wonderful keyboard run from Rave Tesar and a sublime, funky bass solo from Leo Traversa while Mark Lambert swaps acoustic for electric guitar mid song to power the band towards a fitting crescendo.

My only (minor) gripe with the two CD’s was the fading in between tracks which broke the live spell somewhat but that’s rectified on the DVD and Blu-ray. The song introductions, stage raps and audience interaction are what makes live performances special and unique and, captured here, they add another dimension to Ashes Are Burning. Recorded at a venue that simply drips with history it seems that the Keswick Theatre is the perfect frame for Renaissance’s music and the historic setting suits the band perfectly. Against a backdrop of Annie’s artwork and a light show that bathes the band in soft tones and pastel hues songs like ‘Symphony Of Light’ become almost three dimensional and, if you weren’t lucky enough to be at the Keswick Theatre then this DVD (and in fact this whole set) is the next best thing. 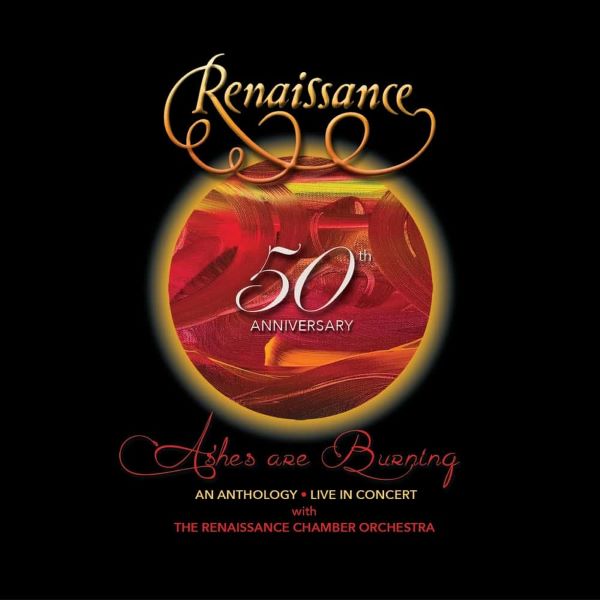