Sometimes the rock’n’roll stars align and deliver a great band into our lap. This was the case in 1974 with Refugee, a trio – Brian Davison, Lee Jackson and Patrick Moraz – who rose from the ashes of the Nice and lesser known radicals, Mainhorse.

Their brief but highly impressive legacy consists of 3 recordings … the 1974 studio album, now remastered; the celebrated Live At Newcastle City Hall and the more obscure, previously unreleased BBC Radio One In Concert recording, both from that same year. And now, the Cherry Red label has assembled that admittedly slim volume of work into a cracking little 3 CD boxset. All 3 are products of the same original material, so some patience is required.

Replacing Keith Emerson, Moraz wrote the bulk of the ‘debut’ album, marrying his jazz rock past to contemporary musical freedoms, producing some of the finest “progressive rock” material of that era, eclipsing even ELP’s bold and ambitious beginnings on their entry level debut, 4 years previous.

The album pivots on the ‘Grand Canyon’ suite. A technically superb and emotionally engaging concerto in 5 movements, informed and influenced by the classics. It flies in the face of critics who dismissed the burgeoning Progrock genre as cold and calculated.

Moraz’s shifting but tightly controlled keyboard textures explored the instrument’s capabilities, proving to be a tight fit with Jackson’s agile bass lines and Davison’s metronomic time-keeping. In the studio they were impressive, live they were sublimely exhilarating.

The BBC Radio recording is pristine, but lacks passion. The Newcastle City Hall gig is the one to remember them by. This was peak Refugee, with all three of them reaching for that awesome musical moment, when everybody enters the zone simultaneously, picking their way through the complexity of Moraz’s songwriting…’Credo’, ‘Someday’ and ‘Papillon’ are all immense live. As is ‘The Diamond Hard Blue Apples Of The Moon’, a pickup from the Nice’s debut album; and a cover of Dylan’s ‘She Belongs To Me’, again which the Nice recorded, for their self titled third album.

That source recording still sounds fresh, and this gleaming re-master brings further clarity and punch to a landmark moment. 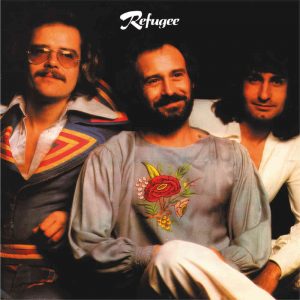