The tour’s name is also the title of the band’s forthcoming coming new studio album with the first single and title track due for release in the coming weeks. The album was produced by legendary Duran Duran and Power Station guitarist Andy Taylor and is due to be released next year with more details to follow. 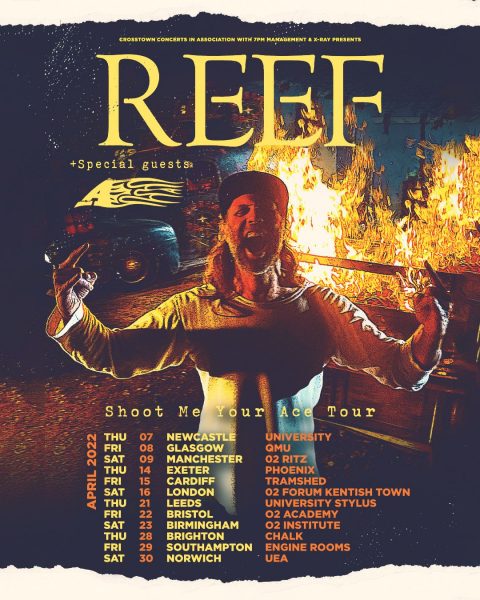 Bassist Jack Bessant comments “We are super stoked to be heading back out on the road again in April 2022 AMAZING! It’s gonna be such a blast to play new songs from our forthcoming album mixed up with Reef classics. Also to see and rock out with our fans after all this time will be truly special as we have all missed the energy flow between the band & our fans when playing live. BRING IT ON!”

The band are also joined by new drummer extraordinaire Luke Bullen formerly of Bryan Ferry’s band and prior to that drummer for Joe Strummer’s band The Mescaleros. Both Bullen and REEF guitarist Jesse Wood have been great friends since playing together as teenagers in one of their first bands called ‘Woodspirit’ 25 years ago.

Wood explains, “It was serendipitous we were auditioning drummers and had just had a full day of auditions when I literally walk into Luke coming out of an elevator. What was even more crazy was the fact that he’d been talking the night before about me!

“I asked him what he was up to and whether he wanted to come down and have a jam with us and play him our Shoot Me Your Ace album demos. He said yes and Hey Presto two weeks later thanks to the wizardry and production talents of Andy Taylor and Luke’s natural ability to get the feel of a song and nail it, there was an album.”

Andy Taylor also joins the band as a special honorary member on guitar on the new album capping off an altogether impressive line up alongside REEF founding member and vocalist Gary Stringer.

The band will also be joined by Leeds alternative rock act ‘A’ as special guests for the tour who recently played to great acclaim at the special Download Festival Pilot event.

Bessant adds “Having ‘A’ on tour with us will make for a killer high energy night. It will be so cool to reconnect with these rockers again and hear what they are up to.”
Tickets for the Reef Shoot Me Your Ace tour go on general sale on August 6th.

For more details and to buy tickets go to http://www.reeftheband.com