Reading and Leeds Festivals announce today a total of 77 more acts to play the 2022 edition of the festivals, including WILLOW, Frank Carter & the Rattlesnakes, All Time Low, D-Block Europe, Bad Boy Chiller Crew, Beabadoobee, The Lathums, and Poppy, amongst many more. The acts join the previously announced headliners playing the dual Main Stages, Dave, Arctic Monkeys, Rage Against The Machine, Megan Thee Stallion, Bring Me The Horizon and Halsey, and feature on a line-up alongside the most exciting talent in rock, indie, alternative, hip-hop and dance with even more artists yet to be announced. The three-day festal takes place on 26-28 August 2022, returning to Reading’s famous Richfield Avenue and Leeds’ legendary Bramham Park. Tickets on sale now, via https://www.ticketmaster.co.uk/reading-and-leeds-festival 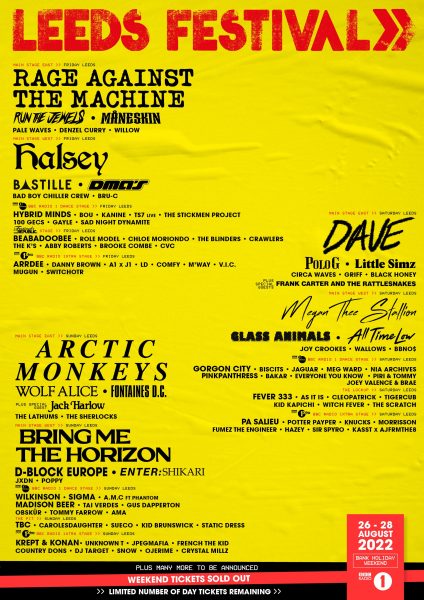 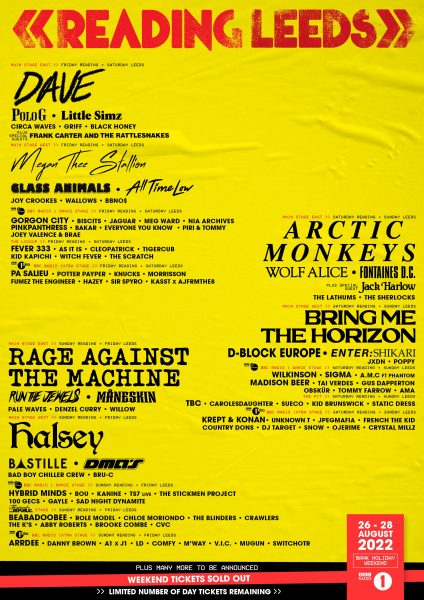 With hundreds of acts set to play, Reading & Leeds is set to return as the ultimate festival weekend of the summer – defining and celebrating the sounds of modern ground-breaking music, as well as a world-class comedy line up.

Fans can be the first to hear further line-up announcements, artist news and much more by signing up to the newsletters at www.readingfestival.com and www.leedsfestival.com or via the official Reading & Leeds Festival app, available to download now on Android and iOS.