Pivotal in the formation of the L.A. glam metal movement Ratt were a band who defined a generation. In a scene that invariably valued style over substance Ratt came preloaded with talent and a debut album in Out Of The Cellar that easily outsold and outclassed their nearest rivals. Lovingly remastered and repackaged in a box set, their first five (and best) albums have been reissued to illustrate why it initially seemed Ratt would take the glam metal crown, later to be stolen by Mötley Crüe. 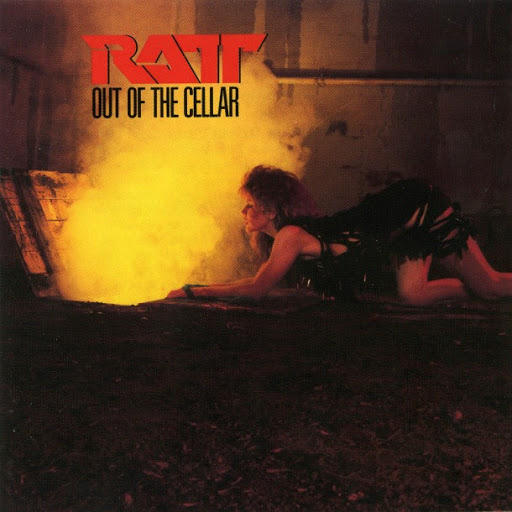 Less punky than their peers Ratt took their melodic cues from Van Halen and Aerosmith and welded it to some serious Judas Priest style riffage. And it’s one of those riffs that opens Out Of The Cellar in the shape of ‘Wanted Man’. Strutting its stuff like Jessie James Ratt display a muscular sound and a dark lyricism not typical of the genre, and they both combine to create a strong introduction. When it was de rigueur for glam albums to sound reedy and tinny ‘You’re In Trouble’ puts Juan Croucier’s bass centre stage with a satisfying rumble. Like an unruly guest ‘Round And Round’ was the single that gatecrashed the charts and brought Ratt into the mainstream consciousness and it’s easy to see why. An era defining slab of metal wrapped up in a glorious melody with a hook that’d floor even the most cynical music snob, ‘Round And Round’ doesn’t bear over analysis, it’s just a great, great, great song.

Out Of The Cellar is an album that explores the seedy underbelly of the nocturnal world as evidenced by the gritty ‘In Your Direction’ and also ‘She Wants Money’ with its quick fire staccato riff. Originally appearing on the Ratt EP, ‘Back For More’, here it has 90 seconds shaved off and becomes a far more snappy affair. When I say glam metal was pop in the mid 80s I’m not being facetious, I mean it was ‘popular’ and to illustrate this Atlantic Records plundered Out Of The Cellar to release single after single after single. That’s really no surprise as Ratt’s debut is one of those rare albums (like Never Mind The Bollocks or Appetite For Destruction) that delivers classic after classic with all killer and no filler as ‘The Morning After’ precedes the amphetamine charged ‘I’m Insane’. ‘Scene Of The Crime’ brings down the curtain on the original album while this reissue adds the single edit of ‘Round And Round’ as a bonus track. 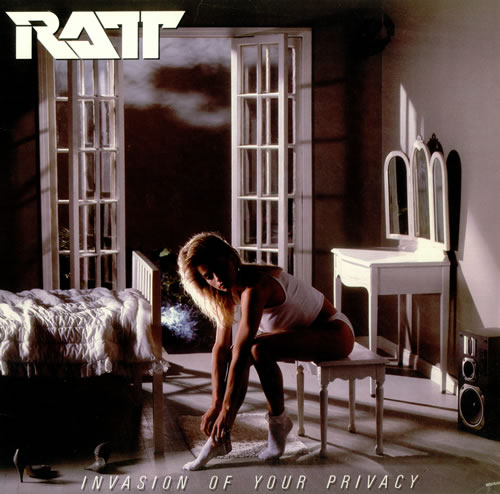 Released barely a year after their debut album Ratt successively avoided the sophomore slump with Invasion Of Your Privacy. Pretty much the same as their debut (only housed in a blue sleeve) it didn’t tinker with a winning formula: same producer, same line up and (most importantly) similarly catchy tunes. If anything their second album seems bolder, riding the confidence wave the whole band seems to have come out of the shadows (pun intended) to be louder in the mix. Walking a fine line between metal and pop is opener ‘You’re In Love’. Relentless in riff yet inherently melodic it’s an anthem of the times. If someone asked you to summarise what was so great about ‘80s glam you’d probably play them this cut. ‘Never Use Love’ picks up the baton and runs with it and proves Warren DeMartini and Robbin Crosby the most underrated duo as the guitars slide and slither between the pair.

Close, but no cigar, ‘Lay It Down’ didn’t quite do the same business as ‘Round And Round’ but it’s still a cool tune made for dancing (horizontally, or vertically). There’s a unique sound to this album, a ratt squeak if you will, and that’s primarily due to DeMartini’s guitar, whether rocking out to ‘Give It All’ or the moody swagger of ‘Between The Eyes, it’s delivered like a series of high voltage shocks from a defibrillator. The final three tracks tell why Ratt were considered the party band: ‘Got Me On The Line’ and its telephone sample (only in the 80s), ‘You Should Know By Know’ with a huge sing along chorus and the sleazy ‘Dangerous But Worth The Risk’ all illustrate why the world was so enamoured with their brand of ratt ‘n roll. 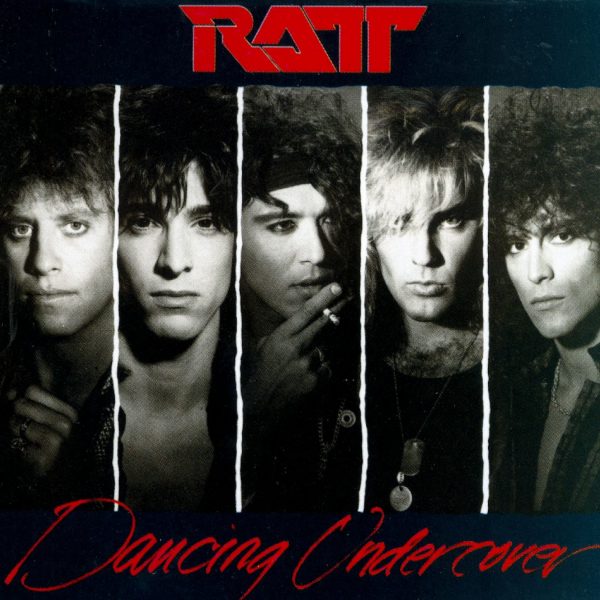 Their third album in as many years 1986’s Dancing Undercover didn’t quite live up to the dizzying heights of its predecessors. That’s partly due to the musical landscape which found thrash metal in the ascendency with landmark releases, in particular Slayer’s Reign In Blood, which made everything else seem lightweight and trivial. ‘Dance’ was the strong opener, hard yet heavily laden with groove, it had that crossover appeal (like Kiss’ ‘I Was Made For Loving You’) and should have been a much bigger hit. The sleaze factor is still high with ‘One Good Lover’ and the raucous ‘Drive Me Crazy’ speeding by. ‘Slip Of The Lip’ is another groovy number and that’s the common theme throughout: it’s an album made for raunchy dancing. Perhaps attesting to the predominance of thrash ‘Body Talk’ finds Ratt playing faster than ever and unleashing a high octane rocker.

Unashamedly melodic ‘Looking For Love’ is an alley cat taking a midnight stroll through a neon soaked metropolis and drips with nocturnal sleaze appeal. Light and agile on it’s feet, like a prizefighter shadow boxing, ‘7th Avenue’ speaks of illicit rendezvous and proceeds the punchy ‘It Doesn’t Matter’. ‘Take A Chance’ has a bluesy feel and some fine soloing before ‘Enough is Enough’ brings the original album to a conclusion. This reissue adds the single edit of ‘Dance’ as a bonus and, with a song this good, that’s no hardship. 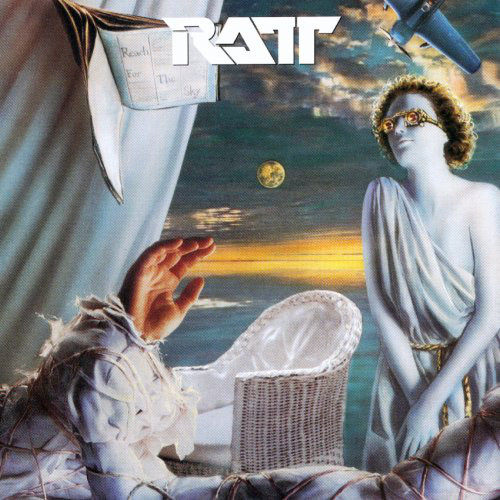 In its preposterous Spinal Tap sleeve Reach For The Sky found Ratt on the downswing. It’s an album that starts confidently enough with the powerful strut of ‘City To City’, it’s an updated Ratt with a fuller, bolder and professional sound but those ingredients have distilled some of the former magic. Whereas the previous triptych had a rough hewn, street level feel that’s now been polished out and sanitised: sometimes it’s better to have a little dirt under the fingernails. That’s not to say Reach For The Sky is a bad album, the two singles follow: ‘I Want A Woman’ and ‘Way Cool Jr.’ both swagger like Aerosmith and Van Halen respectively but it’s a top heavy record with the good stuff loaded up front.

‘I Want To Love You Tonight’ is a ballad that tries to recapture the magic of Invasion Of Your Privacy’s ‘Closer To My Heart’ (it even occupies the same position in the running order) but with the sleaze factor removed it limps along like a flat tyre. Musically the band are still on the ball and the catchy hooks are still there with ‘No Surprise’ being an earworm of the finest order yet as time passes the dumb lyrics of tracks like ‘Chain Reaction’ only become more cringe worthy. The bonus track is revelatory, a live version of ‘Way Cool Jr.’ (from MTV Unplugged) that when stripped back reveals an inherent groove and song writing talent. Yet we can’t forget what we know: if another band had released Reach For The Sky I’m sure we’d be raving but held up to their previous work, it seems weak. 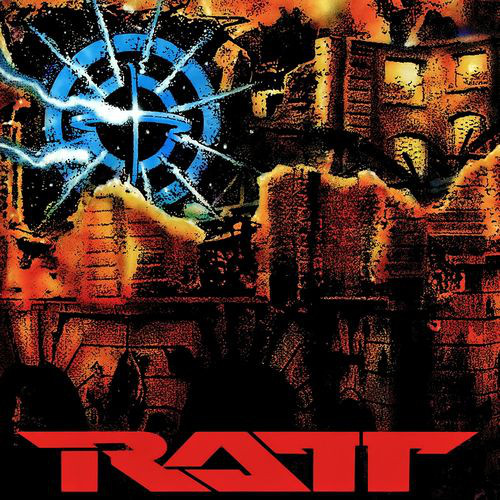 Perhaps sensing something was wrong changes were made and the big guns wheeled in for 1990’s Detonator. Out went long time producer Beau Hill and in came metal hitmaker Desmond Child and pop songsmith Diane Warren, hired as co-writers along with guest musical appearances by Jon Bon Jovi and guitarist Michael Schenker, who added his considerable talents to opener ‘Shame Shame Shame’. It’s a strong track that lures the listener in with a snake like guitar solo. ‘Scratch That Itch’ captures some of their former magic yet the following ‘One Step Away’ is the type of syrupy sweet pop metal that wouldn’t be out of place on a Brat Pack film soundtrack.

So did all the outside influences work? Kind of. Detonator is an improvement on Reach For The Skyalthough it doesn’t reach the peak of earlier albums. Paradoxically, and despite the best efforts of Desmond and Co., Detonator was the only album in this box that never went platinum. ‘All Or Nothing’ is a pastiche of Aerosmith’s ‘Rag Doll’ and the whole album sounds like Alice Cooper’s Trash (or any other album Child’s produced). When once Ratt were one band in a million they’ve been reduced to one amongst millions.

Ratt: The Atlantic Years is a box set on which the first three discs encapsulates all that was great about sleaze metal: raw, raunchy and raucous it was music made for fighting and loving. The final two discs, while certainly not bad, highlight what was bad about glam: metal was all about integrity and these two albums often sound forced and frivolous. However, if you want to relive the glory days of glam there’s no better option than this set. 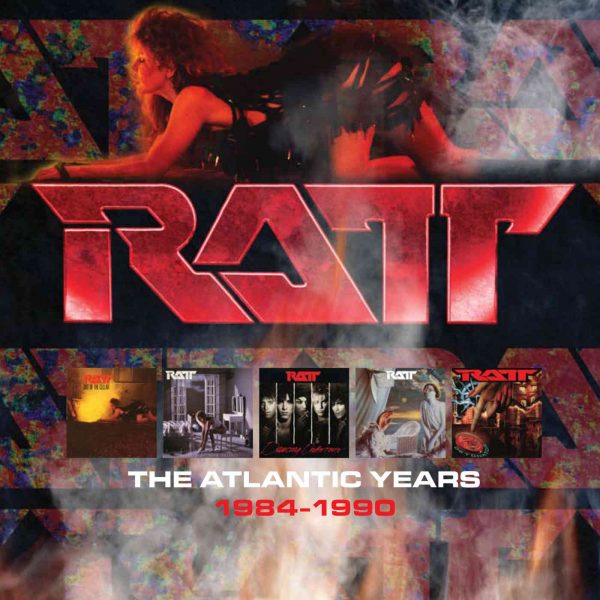