Reach For The Sky (1985) was Ratt’s fourth album. It sold over a million. So, unarguably, the band’s music retained a commercial lustre. Yet, at the time and since, the music press has been critically ambivalent, and the album has carried this uncomfortable baggage for 30 years.

It was and still is a puzzle. No one was expecting fresh, distinctive textures or a midlife switch to post-feminist maledom. This was “Bandana Rock”, the staple diet of the macho sexist culture of the time. The style that this band elevated to an art form. Yes, the forensics confirm some unevenness in song quality, but putting aside some of Pearcy’s clichéd sexual imagery, they detect a handful of tracks that capture the glitz and the grime in equal measures, and a growing sense of insight.

‘Way Cool jr’ is a giant of a melodic rock track, condensing big band brass, funky blues licks, a hard rock groove and a perceptive lyric into an anthem for a generation. Beau Hill again produces, and helps whip up ‘No Surprise’ into a sharp, polished and tunefully harmonised, if malign condemnation of the straight world. With these two songs, and the bite and sting and nascent song structure sophistication of others – ‘City to City’ and ‘Chain Reaction’ are good examples – the band were beginning to reveal, that perhaps, after all, they were more than capable of shedding the genre straitjacket that shackled so many of their contemporaries.

Reach For The Sky may have been damned by faint praise in the music press, but the fans knew what it was and bought it by the tens of thousands. And here, on this reissue, the label venerates it the only way it can…by polishing up this minor work of mid-eighties melodic rock art to a splendid remastered shine, adding an insider’s lines notes from the man who was quite literally on the spot in1985, Malcolm Dome. 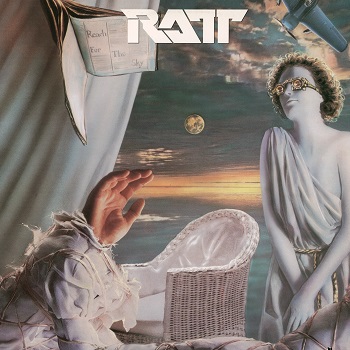 I Want A Woman

Don’t Bite The Hand That Feeds

I Want To Love You Tonight

What’s It Gonna Be