Return with us to a time when The Who and Free had only just stopped bovvering the singles charts, Thin Lizzy and Status Quo were getting their second chance at success because of them, and Judas Priest would leave Birmingham Odeon’s audience waiting two years running just so they could make appearances on Top of the Pops. After spending so much money making albums, record companies weren’t shy about printing a few thousand 7-inches as a tax loss and Radio 1 airplay could help promote a tour that would in turn sell the album. Blackmore still had his old Deep Purple management and they knew the game, but seemed to be stacking the deck against themselves with their early choice of Rainbow singles. History reports Blackmore being unhappy with the R’n’B direction Purple had moved into (despite going funky as early as their ‘Never Never Before’ single), took umbrage they wouldn’t cover the old Quatermass single ‘Black Sheep of the Family’, so gathered their support act, Elf, to record a solo album, Richie Blackmore’s Rainbow. 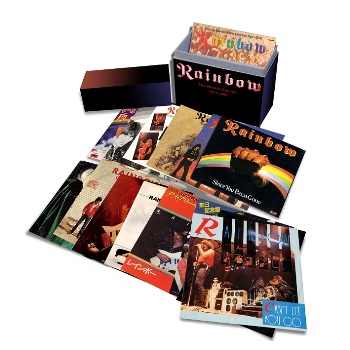 Edited, ‘Man On The Silver Mountain’ lurches out of the speakers slovenly, a Piltdown Man for stoner rock but powerful as hell as Ronnie James Dio’s voice roars like Grizzly Adams while Blackmore’s triplet runs infiltrate the main riff playfully leading to a quasi-mystical chorus that had no chance of attracting your average housewife listener, but would become an extended live crowd pleaser, so a staple filler for future single B-sides. More chance of its own flipside ‘Snake Charmer’ becoming a minor hit; on album you’d lift the needle and opt for a heavier track, here you catch its subtleties with the man in black not only weaving several guitar lines in and out of the song, but rather than his customary one-upmanship against fellow soloists and singers instead courting and coaxing in call-and-response with Dio in the manner Paul Rogers and Kossoff  did, leaving you wondering if it was originally written for Purple when Rogers nearly joined. Pairing an instrumental and acoustic number as the next single could only confuse those who bought it, much as The Yardbirds’ ‘Still I’m Sad’ became a tour de force by the time of the double live On Stage. Bringing out a 4 track EP next had no commercial logic, other than intended US FM airplay, with the ballsy piano-belting ‘If You Don’t Like Rock ‘N’ Roll’ reminiscent of Nazareth or Bad Company minor-hits probably going unheard.

Ditching the cowbell tapping Gary Driscoll for Cozy Powell, the drummer responsible for hit single ‘Dance With the Devil’, and only retaining Dio in the shakeup, Blackmore was now on a mission: inspired, and presumably ignoring any management desires; investing in orchestras, extravagant record sleeves and the album that wrote a new book for heavy metal, with Rainbow Rising. Tragic then that the only single released from it was the heavy hooking riff groupie story of ‘Starstruck’ that would surely have been a monster hit had The Sweet recorded it a couple of years beforehand.

That line-up would get one more chance to shine on a double live gatefold extravaganza, but the EP’s edits poorly service ‘Kill The King’ shorn of its ‘Somewhere Over The Rainbow’ metal meltdown intro. Regardless, Blackmore was now king of the castle. Those guitar gods whose shadows he’d played in were now either imbibing too many drugs or wandering off into jazz fusion. Schenker and Angus might’ve been causing the kids to riot, and across the ocean Van Halen was training the troops to double-hand tap, but for now Blackmore reigned supreme, his over-amplified confidence taking him onto inspired guitar histrionics, deft virtuosity with Eastern scales and birthing that whole neo-classical style as a minor aside. For one brief period he was untouchable, given Heaven’s mandate. Ousting keyboard player Tony Carey was a mistake, but comparing the version of ‘Mistreated’ here to the two years’ previous Made In Europe (featuring his last live gigs in Purple and testing out Rainbow riffs during solos) while no disputing the authoritative majesty present in RJD’s voice empowered the song it also lost the resigned emotional context its co-author, David Coverdale, gave it when he sang the blues. Perhaps, to get the ladies coming to shows, some loving was what was needed, a tad more commerciality required? Thus with one last hurrah came the mighty anthem of ‘Long Live Rock ‘N’ Roll’, late night rock shows taking it to their hearts but the polished structure of its parent album too  passé for most.

Former sparring partner Gillan’s band were regularly racing into the charts, Blackmore turning up to play live with them and asking the singer to join Rainbow simply viewed as that week’s publicity stunt, but listening to B-sides like ‘No Time To Lose’ you have to wonder if they too weren’t written with a different singer in mind. As it was, Graham Bonnett had a fine raunchy voice that could also lay down some earnest blue-eyed soul, a shame the music on ‘Down to Earth’ tended towards being a tight, solid production when a looser feel could have explored those possibilities more. Regardless, ‘Since You’ve Been Gone’ was a perfect single for the times, keeping enough of the patched denim brigade on board and their workmates and mom’s singing along too. The in-house written ‘All Night Long’ hit hasn’t worn well, more banal than sleaze-minded. A penchant for instrumentals crept in, suiting single B-sides better than albums; such classical crossovers more suitable for light entertainment prog-players Sky.

With the new wave of heavy metal to the fore Blackmore headlined the inaugural Monsters of Rock at Donington, smashed a guitar and destroyed his hit line-up, leaving the land without an outright guitar god as he flew to America seeking a poptastic alliance with MTV and much as you don’t want to stick on ‘I Surrender’ its Ballard-penned hooks and melodies are infectious. The ecological-socio-political lyrical mish-mash of ‘Can’t Happen Here’ still sounds momentarily apt, an unexpected rush of energy not felt by the band since Rainbow Rising with added commercial zest.  Vocalist Joe Lynn Turner’s often accused of ruining Rainbow, but listening to these singles it’s remarkably his voice that adds beef to anonymous musicality: ‘Jealous Lover’ has a decent Bad Co vibe, ‘Death Alley Driver’ a leaner ‘Highway Star’ rewrite worked better as album opener, and ‘Spotlight Kid’ took the new guitar heroes on at their own game, though the live version featured on CD19 is not got a great production, nor many of the other latter-day live singles, with female backing vocalists unfortunately present. But we also get a great shimmery AOR ballad in ‘Stone Cold’ that touches emotionally in ways Dio’s songs never can, despite which this collection ends as it began with  yet another full-on blistering version of ‘Man on the Silver Mountain’. Rainbow were indeed many coloured.