Fanning the flames of evil

Paul ‘turn down the heat’ Castles gets his fingers burnt by Pyromancer, whose album was released by Godz ov War Productions in March 2016.

As the winter chill starts to bite there are a number of options on the table. A chunky jumper, fluffy socks or a warm chocolate beverage. Alternatively, pop Pyromancer on your turntable and give yourself over to lashings of pure occult fire.

Their album features just five tracks none of which last particularly long. All though are thoroughly enjoyable in a perverse sort of way, ‘Conjuring the Flame’ triggering the carnage. This is real garageland stuff, spiky edgy and raw to the bone.

Master of Graveyard Torment delivers the drums, although an unnatural eruption of sound is a better guide to where his skills lay. This leaves Conqueror Horus to riff away until his black heart is content with both contributing vocals – one high, one low. The result is a sound probably last encountered during a visit to a wildlife park.

‘Barbaric Wrath’ surges on at breakneck speed with Horus spouting satanic barbs in between yet more pressing blastbeats with the whole thing sounding as though the plates of the earth are being yanked apart.

The atmosphere is viciously warped carrying traces of black metal legends such as Darkthrone, although slightly unusually for a BM outfit with this intensity Pyromancer hail from Kentucky in the US.

By the time we reach ‘Inferno’ the duo really are cooking on gas as a pounding rhythm, more infectious than the Black Death grips your eyeballs and almost pulls them from their sockets. Rougher than a Shredded Wheat but not nearly as wholesome, the duo seem intent on causing as much mayhem in as short a period of time as possible. The drums are beaten so savagely you half suspect they’ll be popping up on an episode of 24 Hours A&E in need of some lifesaving treatment.

‘Abyssal Crucifixion’ flies by in the time it takes to knock in a couple of nails and if that offends best not listen to album closer ‘Violent God’ in which more blasphemous brutality spews forth with Master of Graveyard Torment and Conqueror Horus wrecking aural anarchy. You won’t be surprised to hear the pair recorded the album at Studio Hell! 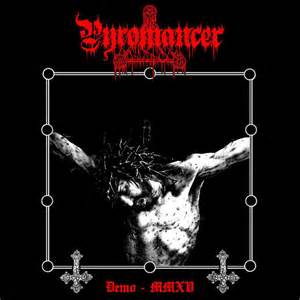