Hell the fuck yes. A shot of pure, uncut Stoner/Doom is just what you need sometimes and Germany’s Purple Dawn deliver that in spades. Just have a look at the video, it’s all there – hair, check shirts, the classic power trio configuration, Gibson SG’s and the sound of far out civil unrest through a large, old amplifier. It’s Sabbath going down an MC5 by-road. So, is the rest of the album this good?

Basically, yes. I guess I won’t get away with this as a full review so I’ll elaborate a tad. We kick off with an instrumental – ”Bonganchamun’. It’s a slow burn to ease us into the album. Nice, fuzzy and full, it’s low end riff scorches off into a beautifully distorted solo. We’re off and running.

And ‘100 Years a Day’ picks up another gear. It’s full steam ahead into a thundering riff and some hoarse, earthy badass vocals. There’s a definite classic Doom vibe – it’s nicely rough around the edges, riffs tumbling over each other in a desperate bid to be heard. The band lock in to a long, wah-wah led groove before roaring back into the riff, pushing to the edge of break up and beyond.

‘Old Fashioned Black Magic’ is simply huge. It’s slower, Doomier, chuggier. It’s greasy and it snarls. It’s like a fuck heavy Steppenwolf..and then it gets heavier. A new, mega-doomy riff monster rears it’s ugly head and then it settles into a truly monolithic groove. We then hit a 1-2 of longer tacks, the centrepiece of the album. ‘The Moon Song’ is a trippier, mellower, more psychedelic creature, a stoned reverie is conjured and the space between the notes gains an equal importance. ‘Death To a Dying World’, on the other hand, is an immense, downtuned noise assault, full of riffs that you physically feel down to your toes, it veers between tension and release, a fuzzed-out Pink Floyd midsection and an uber heavy denouement which hits near industrial levels of brute precision.

We end with an instrumental continuation of ‘Bonganchamun’ and, before you know it, it’s all over. Purple Dawn have produced an early contender for the Doom album of the year. It’s everything you’ll want plus more, played with fire, heart and a shit load of distortion. If monolithic riffage and psyche wig outs are your ‘bag’ (man) then you’ll not want to miss this. 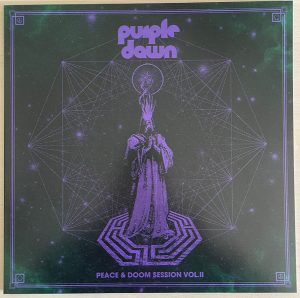