Ah, 1994. grunge was still going strong, Britpop was in it’s prime and Ozzy Osbourne’s fresh faced young guitar slinger put together a Southern Metal band and released their one and only album, the eponymous ‘Pride & Glory’.

Fast forward 25 years and this oft-overlooked classic is now being re-released, on all-new picture disc version with a raft of bonus tracks. So let’s drift back into the mists of the early 90’s and see what we’ve got.

There was a small Southern metal movement at the time, populated by late, great bands such as Raging Slab, The Four Horsemen and Hogjaw, and Pride & Glory slotted in perfectly as one of the cream of the bunch. They were loud, they were hairy and they weren’t afraid of playing a banjo solo or two!

Speaking of which, banjo is all over the lead track, ‘Losin’ Your Mind’, as is a great deal of Zakk Wylde’s patent kick ass rampaging Viking guitar. It’s a killer track (see above), a highlight on an album with very little (if any) filler.

Songs tended to fall into (at least) one of three categories – brutal Southern rock, epic ballads or acoustic jug band stomps. Of the acoustic stuff, ‘Cry Me A River’ is a brilliant Allman ‘Midnight Rider’ style outlaw tune, seeing pedal steel duel with widdly metal, while the final track, ‘Hate Your Guts’, is a foul-mouthed comedy hoedown – one of those add-on, quirky tracks so beloved of 90’s Alt rockers.

The ballads are stunning, highlighting Wylde’s songwriting and vocal skills. ‘Sweet Jesus’ and ‘Fadin’ Away’ find Zakk channelling his inner Elton. They are fine, radio friendly hits and not what many people unfamiliar with Pride & Glory will expect from Mr.W. There are also heavier power ballads – ‘The Chosen One’, a 7 plus minute ode to his father, is brilliant – downtuned Sabbath doom meets epic, orchestral strings…with an added Hendrix solo for good measure.

And the rockers are an elemental thing of joy. Think Corrosion Of Conformity playing in a Country roadhouse, or Skynyrd, Metallica and Jimi Hendrix thrown into an industrial strength blender. ‘A Horse Called War’ is as furious as it sounds, ‘Shine On’ has distorted harp and industrial metal vocals and ‘Troubled Wine’ is laced with swampy slide geetaw and enough thuggish energy to supply the National Grid for several weeks, making our current (and admittedly great) crop of Southern rock bands sound like anemic mamma’s boys.

Oh yeah, the bonus tracks. We have a nicely balanced mix of acoustic takes, leftover tracks (including the brilliant ‘Mother Mary’ – slide guitar meets fuzz doom meets Zep) and covers, including raucous, raw takes on Sabbath and Zep…and also a compelling piano-led version of ‘Come Together’ which turns the original song inside out, a rarity for a Beatles cover.

It’s a pity that Pride & Glory went no further, the greatness of this debut is tantalising. Zakk Wylde has rarely been better, his creativity was off the leash. This reissue is damn near essential. If you bought this at the time, give it a listen, you may have forgotten how (goddam) good it is. And if you didn’t, or you just weren’t around at the time, then you’re in for a treat.

Released on 25 October 2019 by Entertainment One 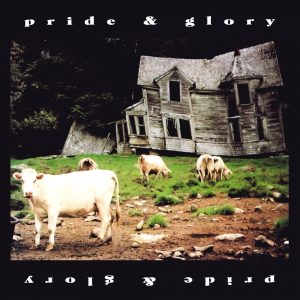