Why Denmark’s Pretty Maids never entered rocks top tier shall forever remain a mystery. When Future World was released back in ‘87 they seemed set for global domination yet, for some unfathomable reason, their brand of melodic metal never really stuck. Future World is an album that’s aged extremely well and to remind the public of their folly they revisit that opus in full for its 30th anniversary (along with other choice cuts) on Maid In Japan: Future World Live.

In true Spinal Tap style, Japan was always a strong market for the Pretty Maids and that loyalty has been rewarded with the recording of this live set. The briefest of intros fires up the crowd and there’s no evidence of Japanese reserve here as the capacity crowd seem well up for it. ‘Future World’ arrives with all guns blazing and the first thing to note is the Maid’s become far heavier in the live environment. With a sound that ebbs and flows the keyboards add nice textures that act as a foil to the hard hitting drums as the guitar spirals like a Catherine wheel. The aptly titled ‘We Came To Rock’ follows and eases off the throttle slightly, trading speed for power the catchy refrain is hammered home with military precision as the track marches like a thousand samurai.

Future World’s original track listing has been slightly rearranged for this recording but it still flows perfectly as the AOR flavoured ‘Love Games’ is saturated with sublime harmonies. It’s another reason why Pretty Maids are criminally overlooked; imagine a heavier Journey or Foreigner and you’d have something approaching ‘Love Games’. A song of two halves, the seven minute ‘Yellow Rain’ begins with acoustic guitars and a huge sing-along before bursting into life with guitarist Ken Hammer alternating adeptly between chuggy riffs and ethereal solos. ‘Loud ‘N’ Proud’ gets its head down for some serious rock action and is paired with the groove laden ‘Rodeo’.

With the crowd prominent in the mix Maid In Japan really captures the essence of a Pretty Maid’s concert. It’s a warts and all document that sucks you in and wraps you up in the excitement of a live gig. Case in point being ‘Needles In The Dark’ with Allan Sørensen’s thunderous drums beating a path for Ronnie Atkins’ oak aged vocals to follow. The power ballad ‘Eye Of The Storm’ gently swirls and circles the listener with retro synths and cascading guitars before we reach the end of Future World with ‘Long Way To Go’. The perfect party song it’s the kind of track that encapsulates all that’s good about Pretty Maids brand of rock. Sure the lyrics are vapid but it has a joy and sheer effervescence that can’t be denied.

Completing this disc are a further five tracks that span the past three decades beginning with the damning indictment of corrupt politicians that is ‘Mother Of All Lies’. A pairing from 2016’s critically acclaimed Kingmaker record follow in the shape of it’s stomping title track and a raucous ‘Bull’s Eye’, which really hits the mark. Then it’s back to 2010 for a heartfelt rendition of ‘Little Drops of Heaven’ from the Pandemoniumlong player. As with many bands of their ilk Pretty Maids had a wobble when grunge hit but they got back on the (rocking) horse with the criminally underrated 1992 album Sin-Decade and it’s the title track that caps this CD. Recalling the more melodic end of the NWOBHM movement (think Demon or Heavy Pettin’) ‘Sin-Decade’ seems tailor made for a set closer.

If you’re new to Pretty Maids unique brand of hard rock there’s no better place to start than  Maid In Japan while old school fans will appreciate the new, punchier nature given to Future World. 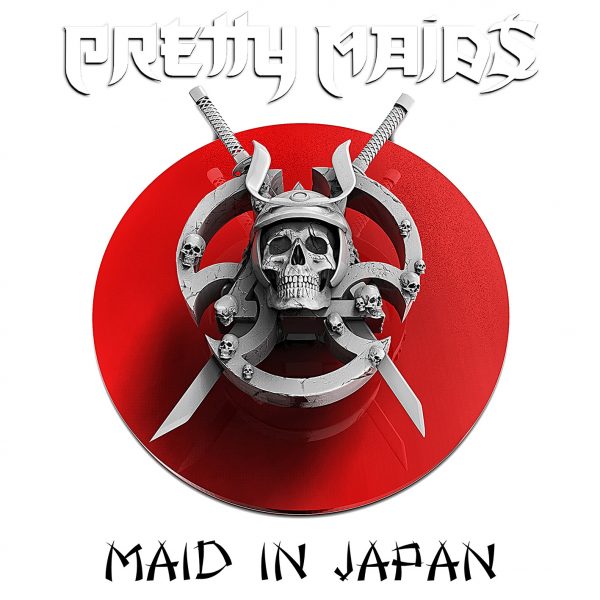