Formed in Italy, the Prehistoric Pigs have been taking listeners on some epic musical journeys for over a decade. Leading lights in the whole stoner/doom scene they seem set to gain some global recognition with album number four, The Fourth Moon. Six tracks of the very best heavy psych, this is a record that’ll swell their already burgeoning fanbase.

With a bowel-loosening bass rumble the cryptically titled ‘C35’ gets The Fourth Moon off to an earth-shaking start and things get progressively heavier from here onwards. Waking like a sleeping giant ‘C35’ soon shakes off any malaise as the Prehistoric Pigs confidently commandeer your stereo. Encapsulating all that’s great about stoner and doom ‘C35’ (and, indeed, the whole album) is a smorgasbord of chunky riffs, snaking solos and thunderous drums. I’m picking up a definite ‘60s influence on tracks such as ‘Old Rats’ but the darker, seedier side of that decade; they’re more bad acid nightmare than hippy dream but the band aren’t all bludgeon. Lighter, almost ambient sections, provide a contrast to the weighty sections with each highlighting the other and the result is an album that pushes and tugs with the gravitational pull of a large planet.

Featuring brothers Juri and Jacopo Tirelli (guitar and bass respectively) and drummer Mattia Piani the Prehistoric Pigs make a sound that’s much bigger than their constituent parts. If you want to know how how heavy a trio can get then look no further. Juri’s guitar is downtuned and dirty and drags it’s knuckles like a neolithic man while Jacopo’s bass is an anchor tied to a sinking ship and it drags the listener down to delirious depths. Mattia seems intent on nailing his kit to the studio floor and he’s battering down the door of your cranium and, once inside, he’s not leaving anytime soon. The dynamic time changes on ‘Crototon’ are electrifying as the band set about building a huge sonic structure while using a blunt chisel and the result is a rough-hewn song (and it’s all the better for it).

It seems that the Prehistoric Pigs is the perfect name for this combo as there’s something primordial about their sound. With brute strength the band set about pulverising their instruments and listening to The Fourth Moon is rather like being clubbed over the head by a caveman (but in the best way, of course). However, for all their blind aggression they never lose sight of song structure and while the title track may teeter on the edge of a precipice the band show great restraint by keeping everything within strict parameters. With plenty of feedback and foot hard on the distortion pedal ‘Left Arm’ is delivered with that Black Sabbath crunch which sets things up nicely for the up-tempo and tenacious closer ‘Meteor 700’.

While the stoner scene can often be viewed as regressive and often harks back to some mythical age the Prehistoric Pigs, despite their name, have their sights set firmly on the future and The Fourth Moon comes highly recommended. 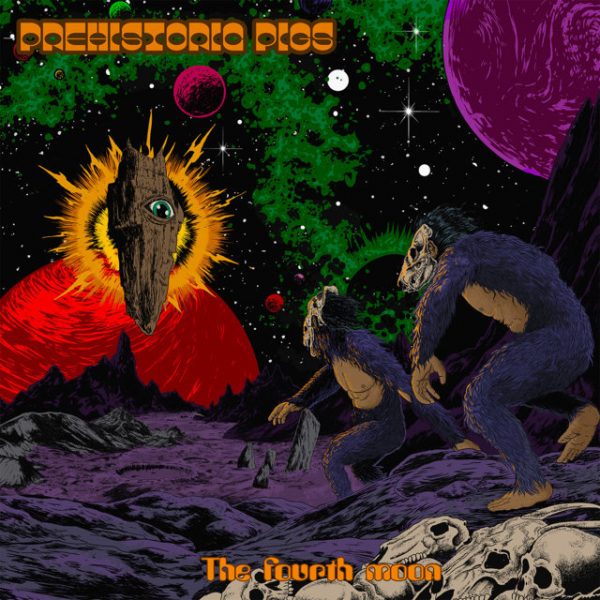