Before you even get to the CD inside, the album artwork gives you a fairly sizeable hint about what to expect with ‘Welcome To Bobby’s Motel’. Quirk. In-jokes. It smacks of Monty Python and Frank Zappa. Of surreal, angular rhythms and an outlook that you are either going to shun (“I want nothing to do with these kind of folk and their subversive ways”), or else going to sell everything except the clothes you’re wearing and choogle on over to their compound out in the desert somewhere.

Oh yeah, the music. Pottery are a Canadian 5-piece and ‘Bobby’s Motel’ is their much – anticipated debut, following on from last years brilliant ‘No.1’ EP. Rest assured, this titular motel is a much weirder place.

So, who’s Bobby and where’s his Motel? We’ll get to that later. Let’s check out the music first. The opening title track slams us into a restless, drum-led ‘riff’. It is indeed angular, and twisted. A ball of wired energy that morphs from riff to riff, constantly on the move and full of jarring gear changes. The guitar is gently fuzzed and there’s more than a trace of garage rock. So far so good.

And that’s pretty much where we stay. ‘Hot Heater’ (which actually seems to be about a heater…but who knows) has a definite funky Talking Heads vibe. It’s exceedingly percussive. A skittish, fucked up (but happy) thing. It mentions 1989 a lot. Yes, Talking Heads are definitely an influence. As is Devo. Lot’s of Devo. A youthful, rougher around the edges Devo.

‘Under The Wires’ has sharp edges and multiple personalities…and a killer bass line. It’s a Frankenstein’s monster of bolted on riffs and tempos. If White Denim had been around in the 80’s they may have sounded a bit like this.

What becomes increasingly apparent is that this is a drum album. They are everywhere, filling every gap, leading every song from the front. Songs often become an excuse, a jam, something to drape over the top of the ever present drum abuse. There’s cowbell…lot’s of cowbell. There are bongos, in fact, percussion is almost as prevalent as the drums. Have I mentioned drums?

“C’mon, gimme the drums” howls vocalist Austin Boylan at one point. And on it thunders. The album is centred around ‘Texas Drums Pt. I & II’, an epic paean to, urm…drums. “Won’t you play the fuckin’ drums for me”, intones…Bobby(?) at one point before the song reaches a trippy, fuzzy, majorly discordant crescendo.

But there’s other stuff. ‘Reflection’ is almost a traditional song, well, the closest we come to one here. It’s a chilled moment of, um, reflection which again doffs it’s cap to David Byrne. ‘NY Inn’ barrels along like prime Birthday Party, while ‘Take Your Time’ is an aural speed hit that leaves you a twitching wreck – grinding your teeth, pacing the room, looking for Fed choppers overhead. And then it speeds up.

It’s a tad exhausting and overwhelming when taken in a single sitting. But maybe that’s the point. Bobby’s Motel isn’t for straights. It’s not like Arlo Guthrie and Alice’s Restaurant, it may not be a safe haven. You don’t come for the glamour and the cuisine. It’s kinda ratty. There’s peeling wallpaper and damp in the joins – only a certain type can handle this place and only a certain type even knows this place exists. It’s a state of mind, a place of communion for like minded souls. A place of acceptance and sanctuary for The Weird. You don’t stay for long, there’s no rest here, you don’t sleep, hell, you don’t even slow down. It’s 24/7. But it’s good to know it’s here when you need it.

Released in June by Partisan Records 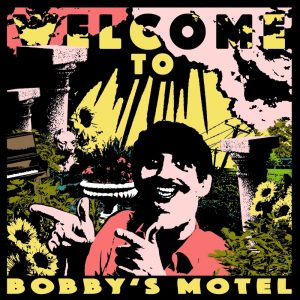