It began as a creative collaboration between two Edinburgh songwriters and musicians, David Paton and Billy Lyall. With the addition of Stuart Tosh on drums they became Pilot and, along with Queen and Cockney Rebel, were the first new acts to be signed to the flagship EMI label – and the first of those acts to achieve a number one single with their song ‘January’. Their single ‘Magic’ was a top five hit in America, reached the top twenty in the UK and to this day is still sung at football grounds up and down the country. They were initially marketed at a pubescent audience, but Pilot were a group of accomplished musicians and their recorded legacy is celebrated in a new 4CD set, Pilot – The Albums.

The band’s debut release From The Album Of The Same Name opens with ‘Just A Smile’, which was inexplicably not a hit first time around, although this was remedied when a rerecorded version reached number 31 the following year. ‘Magic’ remains an enduring pop/rock classic and undoubtedly benefits from the dynamic guitar introduction by fellow Scot Ian Bairnson, grafted on to the start of the song at EMI’s insistence. The trio wisely added Bairnson to their ranks shortly afterwards. Although few songs are as strong as the singles and others such as ‘Aunty Iris’ veer towards the whimsical, From The Album Of The Same Name does a good job of establishing a distinctive sound for the band. Tracks such as ‘Girl Next Door’ and ‘Over The Moon’ have a McCartney-esque charm and Alan Parsons (in one of his first production roles) gives the album a rich sound.

The band’s sophomore album Second Flight is where Pilot begin to hit their stride. The guitar virtuosity of Ian Bairnson, now a fully-fledged member of the band adds greater substance and scope to their sound, as well as adding another songwriter to the mix. ‘January’ is the crowning glory of the album: an irresistible song with a wonderful arrangement and a thoroughly deserved number one single. ‘Call Me Round’ gave the band another minor hit, although ’You’re My No 1’ might arguably have been a better choice. Unlike the first album where Billy Lyall and David Paton shared the song writing credits, on Second Flight the songs were credited individually, highlighting a discernible difference between the commercial pop of Paton and the more eclectic, experimental approach of Lyall. Tracks such as ‘You’re Devotion’, ‘Dear Artist’ or the instrumental ’55 Degrees North 3 Degrees West’ displayed a different side to Pilot and it’s hard not to share Paton’s assessment that, with the combination of styles, the band were evolving into something more substantial. Sadly, it was not to be, and Lyall left Pilot after the recording of Second Flight.

Down to trio once more, the band relocated to Canada and worked with Roy Thomas Baker on the album Morin Heights. The result was a much tougher sound with the guitars much more prominent and layers of vocal harmonies reminiscent of Queen or Sweet. Ian Bairnson excels on this album and it is well worth investigating for excellent pop/rock tracks such as ‘Trembling’ and ‘Maniac (Come Back)’ which are a long way from the style that many people would associate with Pilot. ‘Canada’ and ‘Penny In My Pocket’ were strong, commercial singles and quite why the latter, with a superb, controlled guitar solo from Bairnson towards the fade out wasn’t a hit remains a complete mystery.

By the time of 1977’s Two’s A Crowd, Pilot were a duo of Paton and Bairnson. The album reunited them with producer Alan Parsons and was once more graced by Andrew Powell’s glorious orchestral arrangements. Having been denied a CD release (outside of Japan) until now and overlooked by every compilation album out there, Two’s A Crowd can finally assume its rightful place among Pilot’s body of work. ‘Get Up and Go’ should have been a hit – and had it been released two years earlier almost certainly would have been. ‘Library Door’ and ‘One Good Reason Why’ are both beautiful, thoughtful songs built up from acoustic guitar whilst ‘Ten Feet Tall’ is reminiscent of 10cc, perhaps indicating the directions that Pilot could have taken had they continued.

By the end of the seventies Stuart Tosh had joined 10cc just in time for their album Bloody Tourists and their massive number one hit ‘Dreadlock Holiday’. Billy Lyall was a member of Dollar’s band and his keyboards featured prominently on their hits ‘Shooting Star’, ‘Who Were You With In The Moonlight’ and ‘Love’s Got A Hold On Me’. Both Paton and Bairnson had already linked up with their producer and were integral members of The Alan Parsons Project whilst Andrew Powell called upon them to provide bass and guitar for the debut album of another EMI artist he was producing – a young woman by the name of Kate Bush. It is Ian Bairnson’s guitar solo that you can hear at the end of ‘Wuthering Heights’.

With a smattering of bonus tracks across three of the four discs, Pilot – The Albums is a welcome opportunity for casual listeners to go beyond their best-known singles and for fans to enjoy the stellar musicianship of a fondly remembered band. 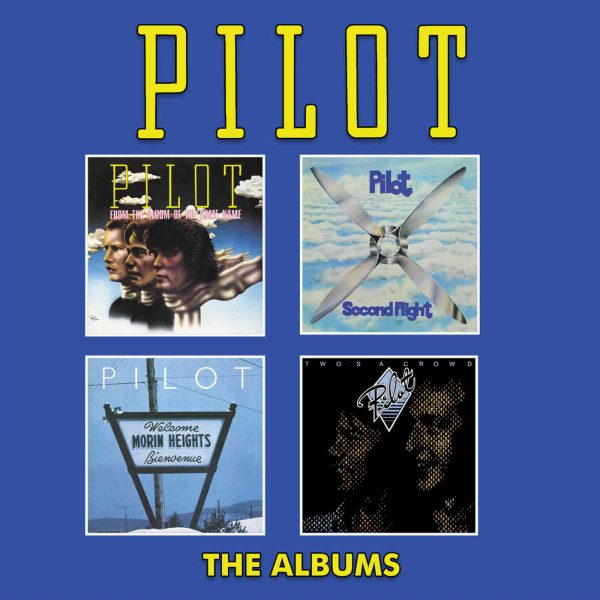 From The Album Of The Same Name: