Pig’s Blood’s self-titled debut album is a savagely butchered death metal attack that scrapes the bottom of the farmyard trough.

‘Misanthrope Absolute’ opens the carnage up like a stick of dynamite and you can almost feel the blood and guts coming through your speakers as Pig’s Blood go for the jugular from the off, making sure every blow lands with as much power as they can muster.

For sure, you kind of know what you’re getting before you peel back the covers although that in no way diminishes the pleasure of listening to such bestial sonic onslaughts as ‘Taste the Fucking Poison’ and ‘Torches of War and Retribution’.

Black metal outfits traditionally have a chuckle with individual band member names but this Milwaukee quartet seem to have elevated things to little short of a masterclass thanks to guitar duo Infernal Scumbag and Overlord Of The Under Dwellers, their thuggish attacks supported by Drug Pervert Death Hammer on drums. The vocals are a bile feast of croaks, yelps and stomach-spilling roars so the name of Horrible Person just about measures up with the mic. 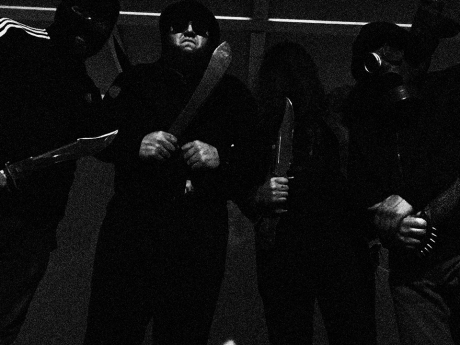 You can take the whole thing as a tongue in cheek send-up if you prefer, but nevertheless when the likes of ‘Rats (This World is a Sewer)’ find their stride the impetus is compelling as crater like breakdowns start to open up the floor against a fuzzed up battery of sound.

‘The Age of Endless War’ has a nicely scissored riff that will take your eye out as soon as look at you while on ‘First Step in Making Things Right’ Horrible Person sounds as though he’s bringing up his dinner.

‘There Will Be No Law’ stomps across the finish line with a massive breakdown as the Wisconsin porkmeisters squeeze in one final blast of slaughterhouse savagery.

It’s fast, furious and feral and you’ll be picking bits of this out of your hair long after you’ve stopped playing it.