Exploding out of Enschede, Netherlands in 1986 Pestilence forever changed the face of metal. Often credited as one of technical death’s Big Four (alongside Atheist, Cynic and Death) they charted new musical territory but, like most pioneers, they never got the credit they deserved. Well, that seems set to change because ninth album Exitivm is a stunning return to form and finds the band reaching new levels of brutality.

One of Pestilence’s main problems is an ever rotating line-up. Musical chemistry is a difficult science and if the wrong elements are mixed the results can be devastating but if the blend is right an alchemy can occur. Joining mainstay vocalist/guitarist Patrick Mamei are lead guitarist Rutger van Noordenburg (Bleeding Gods), bassist Joost van der Graaf (Dew Scented) and drummer Michiel van der Plicht (God Dethroned) and they bring a wealth of experience that suggests Exitivm isn’t going to be less than stellar. However, to find out we must first circumnavigate a haunting instrumental (one of two which bookend the album). ‘In Omnibvs’ is an evocative opener that gently entices the listener into another world and its ambient nature only makes the coming storm that is ‘Morbvs Propagationem’ all the more volatile. The drums and bass lock in to create a weighty foundation while the two guitars go on some unexpected tangents and disappear down wormholes only to resurface on the other side. Thankfully, years of deathlike growls haven’t damaged Patrick’s voice and he still sounds bloodthirsty and gruesome.

When Mamei first resurrected Pestilence is 2014 he promised it would be “More tech and way more brutal than ever before”. Unfortunately, that never materialised and a series of albums followed which garnered mixed reviews and polarised their fanbase. This album works precisely because it returns to the bands roots; it’s like the band have returned to 1991 in a time machine and subsequently Exitivm is perhaps their best offering since Testimony Of The Ancients. However, Pestilence aren’t looking back and Exitivm contains a contemporary edge. The production, full and textured, is bang up-to-date and the synths on ‘Defiicvs’ create a huge, doomy wall of sound that threatens to topple over the listener. Suitably eerie and demonic ‘Mortifervm’ is something of a musical battering ram as the band attack with bludgeoning riff after bludgeoning riff and, as the song ceases suddenly, the silence that follows is stark and positively deafening.

With none of these tracks breaking the four minute barrier there’s a brutal brevity about this album that suggests Pestilence mean business. Aesthetically it reminds me of Reign In Blood; all the excess fat is trimmed off and the resulting sound is all the more direct and powerful. There’s also a lot of variety present which ensures Exitivm doesn’t descend into one long thrash fest as ‘Inficiat’ displays a strong groove metal vibe, the title track employs plenty of techy guitar runs (and to dizzying effect) while ‘Immortvos’ is almost proggy as it shifts sonically through several suites. ‘Personatvs Mortem’ is the rather unsettling outro that wouldn’t seem out of place on some cool horror movie soundtrack.

The aptly titled Exitivm (it means ‘total destruction’ in Latin) finds Patrick Mamei finally fulfilling the promise that Pestilence will be “…way more brutal than before”. And long may it continue. 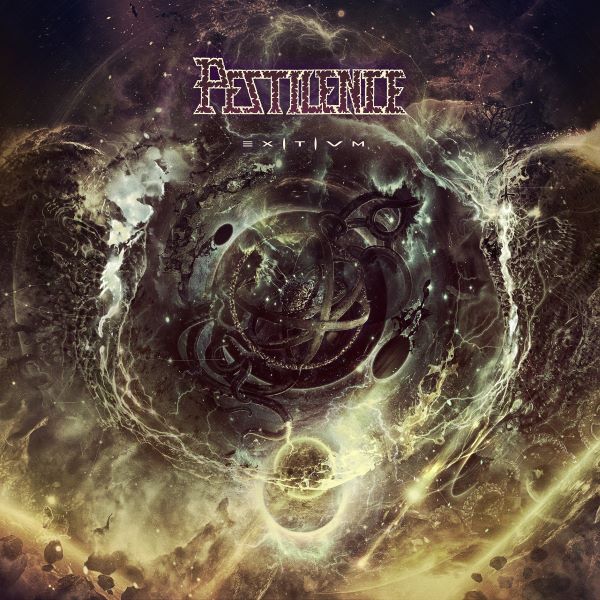