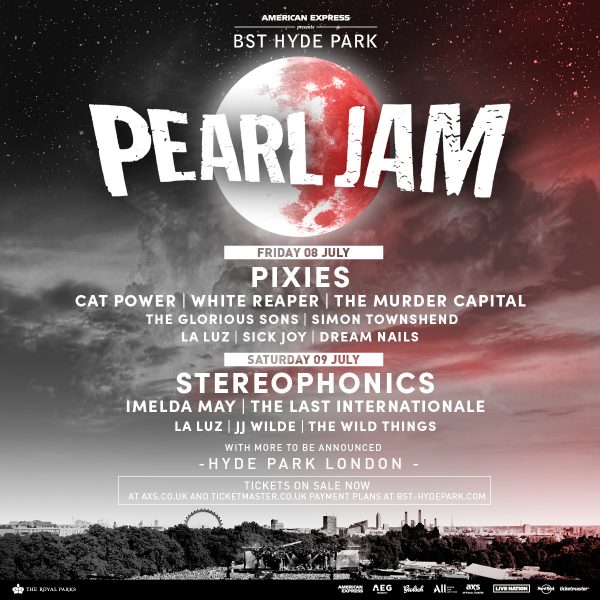 One of Britain’s most formidable rock bands, special guests Stereophonics will join the US rock titans Pearl Jam for their second night at BST Hyde Park. Cat Power, White Reaper, The Murder Capital, The Glorious Sons, Simon Townshend, La Luz, Sick Joy and Dream Nails will all perform on Friday’s show, joined by previously announced special guests Pixies. On Saturday, Imelda May, The Last Internationale, La Luz, JJ Wilde and The Wild Things also join the bill, with more artists to be added.

An unstoppable force in the UK’s alternative rock scene, Stereophonics have stood the test of time, releasing 11 albums over 3 decades, accumulating a massive 7 Number 1s among them. This year marks 25 years since the band’s formation and this legendary show will be packed with hits “Dakota”, “Maybe Tomorrow”, “Have a Nice Day”, new single “Do Ya Feel My Love” and many more. There’s new music on the way too in time for BST… their 12th album ‘Oochya!’ will arrive on 4 March. This will be Stereophonics’ first major performance in the iconic Royal Park for a decade, following their monumental show in Hyde Park for the London 2012 Olympic Games Opening Ceremony.

BST favourite Cat Power returns to Hyde Park after her spectacular 2019 performance. Cat Power AKA Chan Marshall’s acclaimed latest covers album arrived earlier this year. Self-produced and featuring renditions of classic songs from artists like Jackson Browne, the Replacements, Nick Cave and the Bad Seeds, Billie Holiday, and the Cat Power catalogue itself, Covers is at once a reminder of Marshall’s artistically intuitive power and the latest chapter in a truly illustrious career.

Louisville’s White Reaper join the Friday bill to at long last make their Hyde Park debut, having first been announced for 2020 shows. Ahead of the shows, they have a string of European dates on Pearl Jam’s tour ready for the huge BST Hyde Park welcome. Dublin-based post-punk group The Murder Capital are also on the line up. Their music explores the darker side of society utilising rumbling dread and the cathartic elements of post-punk. Their debut single ‘More or Less’ unexpectedly blew up online, propelling the band forward. With the hype swelling around them, they quickly began work on a debut album, 2019’s When I Have Fears which brought them even more acclaim.

Dublin-raised singer songwriter Imelda May comes to Hyde Park following the anticipated sixth album release 11th Past the Hour. May has already released two smash singles this year ‘Just One Kiss’ and ‘Made To Love’, both being made Radio 2 Playlist and Record of the week. With hits including ‘Inside Out’ and ‘Johnny’s Got A Boom Boom,’ she will be excitingly showcasing her first new music in four years.

Each of these incredible line ups will bring equally epic scenes to Hyde Park, with more names on the bills including Simon Townshend, The Glorious Sons, La Luz, Sick Joy and Dream Nails on Friday 8 July and The Last Internationale, La Luz, JJ Wilde and The Wild Things on Saturday 9 July.

London’s festival is back for THE celebration of the summer. BST Hyde Park in 2022 will be a huge and eagerly awaited celebration for the nation. BST Hyde Park has been at the centre of London’s summer since 2013, bringing the world’s biggest artists to the greatest outdoor venue in the world over consecutive weekends with a host of free activities and entertainment during their midweek programme, Open House.  And we cannot wait to welcome everyone back.

American Express presents BST Hyde Park 2022 is back after two years away for more unique shows and unforgettable music moments, for the 8th edition. It has become THE place to be in the London summer, a date in the diary for hundreds of thousands of fans every year.

2020 continued the tradition of must-see experiences that has seen The Rolling Stones return to Hyde Park, Carole King play her classic album Tapestry in full for the first time ever, comebacks for The Strokes and The Libertines and many more.

And of course, Open House will return, the FREE 4 day event between the weekends of music, offering amazing events and activities for everyone – free vibrant live music & entertainment, sensational open-air cinema nights, live sport showings, street food, pop up bars and loads for the family too, including the delightful Chickenshed Children’s theatre.