With under one month to go until the start of BST, Pearl Jam are excited to announce even more incredible additions to their biggest London shows at American Express presents BST Hyde Park shows. October Drift, Fatherson, Life and Daytime TV complete the lineup on Friday 8 July, and The Smiths’ legend Johnny Marr joins the bill alongside Temples, Tiger Cub, Petrol Girls, James & The Cold Gun, PEAKS! and Connor Selby on Saturday 9 July. 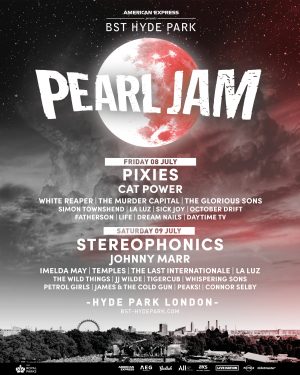 Marr started his career with The Smiths, beginning an amazing history as one of the most influential songwriters and guitarists in British independent music. His subsequent creative journey has seen him at the heart of The The, Electronic, Modest Mouse and The Cribs, as well as working with such names as The Pretenders, Talking Heads, The Avalanches and Blondie.

Last month, Marr completed a hugely successful UK arena tour supporting New York icons Blondie, a show that received rave reviews across the board with The i paper calling it “An evening of pure, potent magic.” Marr has collaborated with countless legends over the years, and just last year he worked with iconic musician and composer Hans Zimmer – with whom he recorded the soundtrack for the 2021 James Bond film No Time To Die, including the title track created with Billie Eilish. Marr’s solo career has given rise to four UK Top Ten albums – The Messenger (2013), Playland (2014), Call The Comet (2018), and his new double album titled Fever Dreams Pts 1 – 4 which peaked at Number 4 earlier this year, described as a “magnum opus, his most fully formed album yet” by The Times, “a soulful record fuelled by fresh ideas” by the NME and “the most ambitious album of his career” by UNCUT Magazine.

Hailing from Northamptonshire, psych-rock trio Temples make their return to BST Hyde Park for the first time in seven years! Since forming a decade ago, they have released three studio albums with their debut Sun Structures hitting the UK Top 10. Their latest album Hot Motion was hailed by DIY as “a real adventure” and we’re excited to welcome them back to BST to hear it live.

Also performing on Saturday 9 July are Brighton heavies Tigercub, whose latest record As Blue As Indigo received a lot of love from rock sites including Classic Rock and Kerrang!, establishing the band’s genre-pushing originality.

Pop-rockers, October Drift, join the bill on Friday 8 July, making their Hyde Park debut in the build up to their anticipated sophomore album release, I Don’t Belong Anywhere, out this September.

London’s festival is back for THE celebration of the summer. After two years away, American Express® presents BST Hyde Park returns for the 8th edition for more unique shows and unforgettable music moments, and a huge and eagerly awaited celebration for the nation. Other headliners for 2022: Elton John (24 June), The Rolling Stones (25 June & 3 July), Eagles (26 June), Adele (1 & 2 July) and Duran Duran (10 July), all joined by a host of special guests.

The festival has been at the centre of London’s summer since 2013, bringing the world’s biggest artists to the greatest outdoor venue in the world over consecutive weekends with a host of free activities and entertainment during their midweek programme, Open House. We cannot wait to welcome everyone back.