The problem is that to review this album I have to stop listening to it. If it’s playing, I find myself getting absolutely lost in it. It’s a big, thick wall of heavy transcendental psychedelic blues rock, and it’s absolutely, totally, and utterly absorbing.

For those of you who’ve not heard of the band, Pearl Handled Revolver came together in 2006 as a studio project between Simon Rinaldo (keys/bass) and Lee Vernon (vocals). A few years later, they’d added Chris Thatcher on drums and Andy Paris on lead guitar to complete the line up in 2009. They made a bit of a splash with debut album ‘Colossus’ in 2012, and followed up with ‘This Mountain Waits’ in 2013.

Where to begin describing the music, though? There are so many layers and nuances that it becomes hard to know where to start. On top of that, the fabulous production and the way this album melds everything together keeps sidetracking me from one moment to the next. There’s always some new delight calling out to grab my attention. My brain’s like an excited toddler: ‘listen to the gravel and grit on that vocal! Ooh, no, the 70’s organ sound! Listen to that! And the drums, and those looping bass-lines… Listen to that now!’ There’s so much louche style going on here that it’s coming across as an effortless production – and then suddenly it all spirals up into a frenetic interplay between the instruments and vocals with so much energy and power that you’re utterly helpless against it.

It’s a swirling vortex of hypnotic sound, heavy blues mingled with thick hallucinogenic under-and-over-tones, and a snarling, growling, wailing vocal on top. It’s the sound of a dingy little bar where nobody bothers you as you slide into oblivion. It’s the gutter, held just out of your reach as you look for something to cling on to. It’s the release you feel as you decide to go with the flow, and you pour yourself another glass…

I may just have a new favourite band. 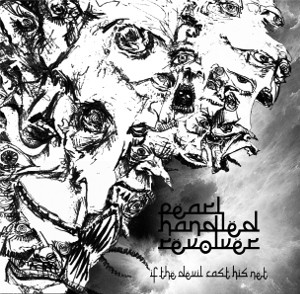